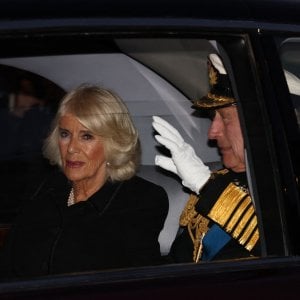 Russian Foreign Ministry spokeswoman Maria Zakharova condemned Britain’s decision not to invite Russian representatives to Queen Elizabeth II’s funeral. “We believe that this British attempt to use the national tragedy that has touched the hearts of millions of people around the world for geopolitical purposes to settle scores with our country … is deeply immoral,” the ministry spokeswoman said. of Russian Foreign Affairs, cited by the BBC.

King Charles III will host 200 leaders and more than 500 heads of state and dignitaries from around the world for Queen Elizabeth II’s funeral tomorrow in Westminster Abbey. It will be, after 11 days of national mourning, the first state funeral in Britain since the death of Winston Churchill in 1965, the largest event with foreign leaders that the British Foreign Office has coordinated in modern times, for which it has been deployed. a safety device comparable to that of the 2012 London Olympics. The President of the Republic, Sergio Mattarella, will be accompanied by his daughter Laura. There will be the emperor of Japan Naruhito and the royals of Spain, Belgium, Sweden, Norway, Liechtenstein, Luxembourg and the princes of Monaco.

Camilla pays homage to Queen Elizabeth: “A lonely woman in a world of men”

The leaders of Russia, Belarus, Afghanistan, Myanmar, Syria and Venezuela were not invited. Embarrassment among conservatives for the invitation decided by the government to the Chinese president, Xi Jinping, who in any case sent his deputy, Wang Qishan. Another thorny issue, the possible presence of the Saudi prince, Mohammed bin Salman. The President of the United States, Joe Biden, arrived in London yesterday evening and will reach the Abbey aboard his ‘The Beast’, the car-bunker inaugurated by Donald Trump. Biden will be one of the few leaders, along with the Israeli counterpart Herzog and the French Macron, not to board the buses that for safety reasons have been organized to transport the leaders to the ceremony.

Charles, who at 73 became the oldest monarch ever to ascend the throne – will host the dozen visiting dignitaries at a reception at Buckingham Palace on Sunday evening, which will also be attended by ambassadors from Iran and North Korea. Among the leaders, the neozelandewse premier, Jacinda Ardern, the Australian prime minister, Anthony Albanese, the Canadian premier, three leaders at the helm of three countries of the Commonwealth Realms, which in the past were colonies of the Kingdom.

At the funeral of Elizabeth II 10,000 soldiers will be deployed, including the Army, Navy and Air Force: of these 6000 used for the procession in London and Windsor. A de facto army that will not only preside but will also participate in the last homage to Her Majesty. This was explained by Admiral Sir Tony Radakin, chief of staff of the British Defense, interviewed this morning by the BBC.

Elizabeth II, all the unknowns of the funeral: Harry and Meghan outside the reception, the yellow Bin Salman and the shuttle case for leaders

“An enormous effort for the safety of the event – he explained – has been planned for a long time and now implemented”. Yesterday Sir Radakin was received by King Charles III himself at Buckingham Palace. “The army, the Navy and the Air Force, as well as our civilian forces, were involved. We will support the event also with the emergency services and also with the volunteers. It is a sad occasion, but we do it with the maximum respect and love, we want to represent the nation “.

The staff, explained the admiral, will follow a metronome of 75 beats per minute, “in order to have the right rhythm for the procession”. “It is our last duty towards Her Majesty Queen Elizabeth. We represent the nation, our mothers, our grandmothers, our brothers, our friends and, of this, everyone is aware of it”.

Queen Elizabeth funeral. Russia excluded, protests: “It is immoral not to have invited us”