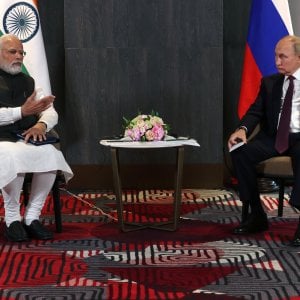 “This is not the time of war,” he says the Indian president Narendra Modi just meets Vladimir Putin with its Ukrainian burden. It is a lead sentence. For two days, for the duration of this Sco a Samarkandin Uzbekistan, the Russian president has done nothing but receive signs of disappointment, if not outright criticism, for the invasion of Ukraine, in which blood is still flowing after seven months. First the Chinese frost with Xi Jinping, underlined by the Beijing media, which devoted a minimum of space to the most awaited bilateral. Then Modi’s cold voyage, pronounced in public: “We talked about it on the phone,” now is the time for food, fertilizers and energy security.

At the Samarkand summit, Indian Modi holds back Putin on Ukraine: “It is not time for war”

by our correspondent Gianluca Modolo

What holds the world together, the Indian leader told him, are “democracy, diplomacy and dialogue,” which Putin believes he can do without. Finally, Turkish President Erdogan also made it clear in the plenary assembly of the 15 – 14 left due to the absence of the Armenian premier due to the ongoing conflict with Azerbaijan – that the war in Ukraine “must end as soon as possible”.
In short, it is a bitter summit for Putin: “He does not have many allies at the moment, he is increasingly isolated”, comments the spokesman for US national security, John Kirby, while for the secretary of state Antony Blinken clear pressure is coming from China and India to “put an end to his aggression”. But no, Putin goes straight and immediately begins to threaten an escalation: “Recently the Russian armed forces have dealt a couple of important blows – probably referring to the bombed dams and hydroelectric plants – let’s consider them a warning: if the situation continues to worsen , the answer will be more serious ». He doesn’t even wait to go back to the Kremlin to get the pebbles off his shoes.

He does it directly at the summit, in the final press conference. «For decades – he says – the West has cultivated the idea of ​​making us collapse, it is regrettable that they use Ukraine for this purpose. We will do everything we can not to let that happen, and if the danger to Russia increases, we will respond harder. They are trying to hit our infrastructure: our goal is to prevent it, that’s why we started the Special Operation. And there is no need to change it today. Our main objective remains the Donbass, we have used a small part of our forces and we are not in a hurry ».
Instead, he spoke to Modi about the possibility of resuming peace negotiations: “I know about your concerns and we also want it to end as soon as possible, but unfortunately the Ukrainian leadership refuses to negotiate and claims to want to achieve its objectives on the battlefield. He says, reshaping his old joke according to which Kiev wants war, not whoever tried to invade it. He also repeats it with the press: “Unfortunately they don’t want to negotiate, so here we are.”

The difficulties of the Russian president ended up monopolizing the summit, which was to be the great gauntlet to the West of 15 countries representing half of the world’s population. There remains Xi’s invitation to “reshape the international order in a more just and rational direction”, and the idea of ​​using less and less dollars and euros for transactions. There is not much else, if not a few invitations to future state trips and a flood of agreements for exchanges and cooperation. Even with Russia, which thanks to the increase in energy supplies to partners, confirmed in Samarkand, is bearing the brunt of the sanctions. For the rest, too many divergent interests, too many ongoing conflicts, too much competition to really turn the summit into a crusade against the West with which several countries are in business. An example: next year the summit will be in India, and Pakistan has already made it known that it may not participate. What remains engraved in Samarkand 2022 is however the warning to Putin: to restore to Russia the dignity of supporting “together with China – as Xi told him – a role of great power for the stabilization of this chaotic world”.