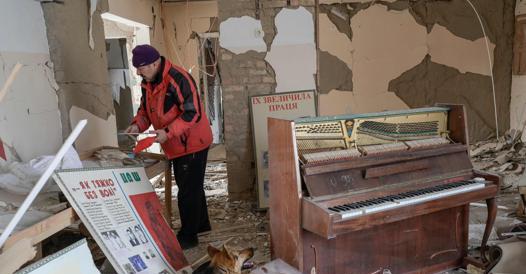 Olaf brings aid from Mykolaiv: “The invaders try to present themselves as benefactors, but they don’t have control of the administration and communications.” The Russians closed in the barracks, distribute food but do not pay police and officials

from our correspondent
MYKOLAIV – «They are locked up in the barracks. And guarding the checkpoints. Sometimes you see someone in civilian clothes, injured, going to be treated in the hospital. For the rest, the Russians are in hiding like rats ». Olaf – the name is made up to protect his identity – every day shuttles between Kherson and Mykolaiv, along one of the most contested and dangerous roads in Ukraine, the one that connects the first city taken by the Russians and the shipbuilding port of the Black Sea. To travel it, avoiding the Russian checkpoints, takes six to nine hours. “I try to bring food and help inside,” he says.

Khersonthat just two days ago it took to the streets again to protest the invader while the Russians, once again, they opened fire on the demonstrators. Kherson resisting, on the mouth of the Dnipro, the Crimean reservoir after the 2014 annexation. And that the orcs (the Russians, ed) cannot afford to lose because “if the Ukrainians were to take it back for them it would really be over”. Kherson hoping because, the Ukrainian army repulsed the assault on the village of Oleksandrivkaabout twenty kilometers further north towards Mykolaiv and shot down a Russian Su-34 fighter.

Those inside cannot speak freely. “The Russians allow civilians who want to leave to leave the city,” one of the city’s rabbis explains over the phone. But before saying goodbye, he clears his throat and explains: “I’m here to protect my community. This is my job, don’t let me put anyone in danger. ” According to Olaf, the Russians are blocking access to aid and the opening of humanitarian corridors on Kherson for one simple reason. «Every now and then they distribute some food from Crimea to try to attract the sympathy of the population. So anyone who wants can be convinced that the invader is a benefactor ».

To confirm this theory, one of the few institutional voices of the city remained active, that of regional councilor Yury Sobolevsky who, on Facebook, talks about two important issues. The first, “prices have increased tenfold”. The second, the salaries of the civil servants. Why – apparently – the Russians, after a month of occupation, failed to pay the wages to policemen, guardians, municipal employees and all those who, in fact, make the administration of the city possible. And not only. “They haven’t taken control of the banks or even of telephone communications.”

In an attempt to counter dissidence, Putin’s media published three days ago images showing 30 people in the Nova Kakhovka square, near Kherson, while demonstrate with the Russian flag. It’s still. According to reports from the Southern command, posters, cards, postcards, forms and other propaganda material would have been printed, also in Nova Kakhovka, with the aim of holding a so-called “referendum” on the creation of the “Kherson People’s Republic”.

A consultation on the model of the one organized in Donbass in 2014, to try to create local governments controlled by Moscow. These attempts, however, the Ukrainian military spokesmen define as “pathetic”, all the more so when one considers that “the occupiers forbid Ukrainians to go to protest rallies, threatening to cut off the connection, water, gas and heating”. The fear, in reality, is that the retaliation against those who do not collaborate are much more serious. And the story of Yulia, who fled to Odessa from Zelenka, near Kherson, leaves no doubt.

“The Russians commandeer cars and beat people. They enter the houses by breaking down the doors, they take the food and everything they want ». And to the question whether he is aware of other types of violence, Yulia responds in a whisper: “There have been kidnappings, also thanks to the information provided by some collaborators but I have not seen anything.” Meanwhile, on the road from Mykolaiv to Odessa, the line of cars of displaced people gets longer. There are not only cars with the BT number plates and the words children. There are also vehicles with the inscription Cargo 300 and Cargo 200. «The first ones have inside them wounded. The second corpses ». Then Olaf smiles. It’s time to leave. “I must go. Kherson needs me. Kherson needs all of us. ‘

The failed occupation of Kherson, in the square against the invader