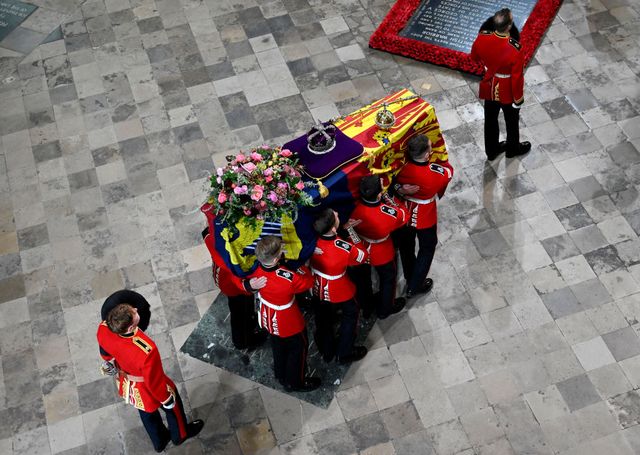 The coffin of Queen Elizabeth II is under the eyes of the whole world. And it is also a treasure chest of symbols And secrets (revealed) of the monarchy. Which? On the coffin of value there are a magnificent crown with an extraordinary past, one globe and one scepter of immeasurable value, one kingdom flag it’s a bouquet with pink and red nuances. A shiver. And while the world greets, this time for the last time, the longest-lived monarch in the history of the United Kingdom, the guests look closely at these court finds: objects that speak without a voice because they are emblematic of the island that begins across the Channel and ends from other part of the planet.

The coffin of Queen Elizabeth II

The coffin of Queen Elizabeth II it was built about thirty years ago. Made thanks to the processing of native English oak, it seals an eternal secret. Inside, in fact, it produces a lead that completely isolates the interior from atmospheric agents such as air and water. Not only. It is said that the natural element, maintaining a good microclimate, prevents the rapid decay of the body. According to the British magazine Telegraph, the company that made Queen Elizabeth’s coffin is the same company that built it the coffin of Prince Philipwho passed away a year ago, and those of Freddie Mercury and Jimi Hendrix.

The crown on the coffin of Queen Elizabeth II

“It’s literally dazzling …” said Anna Keay of the Imperial State Crown and book’s signer The Crown Jewels. “Precious stones make it difficult to look at because of the light reflecting on them.” And, instead, the subjects (and not only) have looked at it all right, there Crown of Queen II resting on a purple cushion above the coffin. After all, that precious joy with a globe on top surmounted by a cross and decorated with a legendary stone (a St. Edward’s sapphire) is a work of art by Rundell & Bridge (historic London jewelery). It was built in 1838 on the occasion of the coronation of Queen Victoria. Weight? 2 kilos and 155 grams. Power and its measures. After unfortunately breaking into a thousand pieces – “she was all broken and squashed like flattened pudding,” Queen Victoria wrote in her diary – she rejoined the royal treasures. And before passing into the hands of ei was Lilibet (to sweetly call the sovereign as she called her husband Philip of her) belonged to her father King George VI. But Elizabeth could not put it as she presented herself at the dawn of her reign. For her, she was remodeled and downgraded to make her look more feminine. And there it is, the glittering treasure. Ready to oversee (somehow) the funeral. Her Majesty wore it for the first time on June 2, 1953, immediately after her coronation: in the section that still links Westminster Abbey to Buckingham Palace. At the time she let herself be portrayed in black and white photographs with this new, faithful companion on her head. And then she wore it once a year, for the speech in front of the Parliament, until recently. In 2018, Eva Grippa writes on The Republic, “it was she, the queen, who joked about how heavy this jewel was, during a historic BBC interview – You can’t look down while reading the speech, because if you did it would break your neck (… ). There are some disadvantages to crowns, but otherwise they are quite important objects. ” The Imperial Crown of State, today, on the occasion of the worldwide ritual, is composed of over three thousand precious stones and gemsincluding “the 317.4-carat cushion-cut Cullinan II diamond and a 170-carat insert called the Black Prince’s Ruby, which would have been worn in battle by Henry V in 1415”, as reported by the Telegraph.

The carriage at the funeral of Queen Elizabeth

To hold and move the coffin of Queen Elizabeth II until the entrance to theWestminster Abbey there are 142 sailors. The coffin travels on the State Gun Carriage owned by the Royal Navy. After all, this is what a tradition began in 1901 on the occasion of Queen Victoria’s funeral. Precisely during the funeral event, the royal protocol changed forever by replacing the horses (suddenly entangled and freed) with the deployment of sailors.

The orb and scepter on the coffin of Queen Elizabeth II

Scepter equals power. On the coffin of Queen Elizabeth II, the symbol of the monarch’s authority over his subjects cannot really be missing. So here is the most precious instrument of the former sovereign of the United Kingdom: a prestige meter decorated with the symbols, dating back to 1820, enameled of the rose, the thistle and the clover. Each represents a slice of the Kingdom: theEnglandthe Scotland andIreland. The Cullinan I diamond – 530 carats – was added in 1910. To date, it is one of the largest (cut) gemstones in the world. Next to the scepter there is one golden sphere enchanting. Is called Sovereign’s Orb and it is the object that most represents the authority of the monarch in the eyes of the Christian world. The ball is embraced by three bands of jewels. Each symbolizes a giant ambition: the precious and imaginative ribbons represent, in fact, the three continents existing at the time of the creation of the sphere.

The flag on the coffin of Queen Elizabeth II

To embrace, completely cover, the coffin of Queen Elizabeth there is also a flag. The design on the actual cloth is divided into four quadrants. Each refers to a nation of the United Kingdom: England (three passing lions) in the first and fourth quarters, Scotland (a rampant lion) in the second quarter and Ireland (a harp) in the third quarter. As reported by Royal.uk: “Wales is not represented in the Royal Standard, as its special position as a Principality was recognized by the creation of the Prince of Wales long before the incorporation of the quarters for Scotland and Ireland into the Royal Arms. “.

The funeral of Queen Elizabeth II: symbols and meanings hidden behind the worldwide ritual