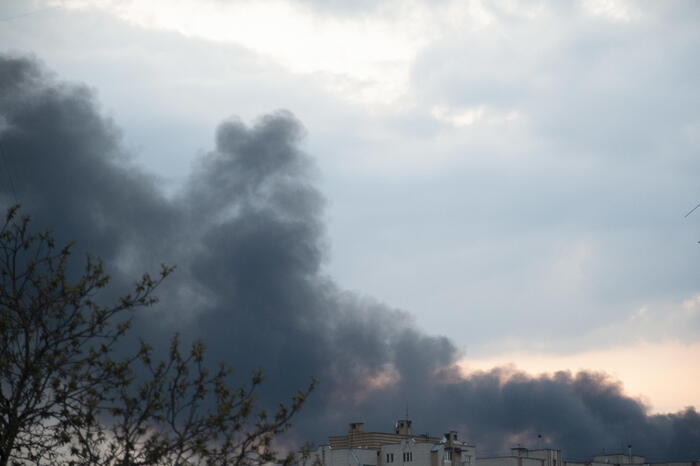 Last night explosions were heard in Kiev, Mykolaiv and Odessa. This was reported by Ukarina 24. Meanwhile, the mayor of Dnipro, Borys Filatov, reported on Telegram that the city center was hit by Russian missiles. In the evening, powerful explosions were also felt in other central areas of Ukraine, such as Cerkasy and Zaporizhzhia, as reported by UNIAN.

Russian forces exercised in the western enclave of Kaliningrad in simulated attacks with missiles capable of carrying nuclear warheads: the Ministry of Defense announced in a statement. Russia has been practicing simulated “electronic launches” of nuclear-capable Iskander mobile ballistic missile systems, the statement said. The exercises involved more than 100 military personnel, who also performed “actions in conditions of radiation and chemical contamination”. Single and multiple attacks were simulated against targets such as airports and command posts of a mock enemy.

The Azovstal steel mill, the last Ukrainian stronghold in Mariupol, continues to resist the Russian assault. The foreign minister of Kiev, Dmytro Kuleba, said in a speech on Twitter. In the evening, Moscow announced a ceasefire for three days to allow the evacuation of civilians from the steel plant. This was announced by the Russian military command, adding that the humanitarian corridor will remain open from Thursday to Saturday and civilians will be able to choose whether to go to the territories controlled by Ukraine or Russia. Interfax reports it.

Mariupol mayor Vadym Boichenko reported violent fighting in the steel plant. The Kremlin: There is no agreement on a meeting between the Pope and Putin. The Ukrainian president calls for the restoration of territorial integrity, including Crimea. Kiev is not ready for serious negotiations, Putin told Macron. Moscow has committed many war crimes in Ukraine, according to Biden.

“Putin’s way of calling victory from the start of the war was to conquer Ukraine, march into victorious Kiev and deprive the country of its sovereignty. Clearly this has not happened. The US will do whatever it takes to help the Ukrainians then. they will define what they consider successful and they will define the terms “. White House spokeswoman Jen Psaki said this in a press briefing. “What is clear now is that Russia has already lost“the spokeswoman said again.

FIGHTING IN AZOVSTAL
“Violent fighting” is taking place at the Azovstal steel plant in Mariupol. This was confirmed on Ukrainian TV by the mayor of Mariupol, Vadym Boichenko, quoted by the Guardian. Boichenko, reported on Ukrainian TV that contacts with the Kiev fighters at the Azvostal steel plant in Mariupol have been lost. Meanwhile, the Kremlin has denied that Russian forces have launched an assault on the plant. “The order has been publicly given by the commander-in-chief (Putin) to cancel any assault. There is no assault,” Kremlin spokesman Peskov said, arguing that Moscow forces are besieging the site and are intervening only to “quickly stop the attempts” of Ukrainian fighters to reach “firing positions”. Ukrainian MP Kira Rudik said there were still 30 children at the Azovstal steel plant in the besieged city of Mariupol in the south of the country. The Guardian writes it. Rudik said there were at least 20 unsuccessful attempts to evacuate people from the steel plant. “You can imagine our tears when the first group” of people “was rescued.” According to the Kiev parliamentarian, “the main objective” is now to make an assessment of all the children who are still in the plant, together with the women, the elderly and the wounded soldiers: The most complicated step concerns the wounded soldiers because Russia does not allows them to go out. Rudik finally specified that yesterday 156 people managed to leave the city to reach Zaporizhzhia.

Ukraine, the mayor of Mariupol: ‘Lost contact with fighters at Azovstal’

THE RUSSIAN CHURCH, ‘WRONG TONES ABOUT THE INTERVIEW WITH KIRILL’
Moscow points out that there is no agreement on a possible meeting between Pope Francis and Russian President Vladimir Putin. This was announced by the Kremlin. “We do not see any progress in the talks with Ukraine”: Kremlin spokesman Dmitry Peskov said, according to Tass reports. The Russian Orthodox Church – meanwhile – affirms that Pope Francis, in an interview with Corriere della Sera, “misrepresented his conversation with Patriarch Kirill”. Tass reports it. “I think that at this point there are no other steps to take, the Holy Father has offered himself the willingness to go to Moscow, to personally meet President Putin, we are waiting for them to react, to tell us what they want. More than so I don’t think that on the part of the Holy Father there can be any further initiative to be taken “. This was stated by the Vatican secretary of state, Cardinal Pietro Parolin, responding to journalists on the sidelines of an event. Meanwhile, the spokesman of the Kremlin, Dmitry Peskov said that Russia has no intention of officially declaring war on Ukraine and therefore the general mobilization on the occasion of May 9, the anniversary of the victory over the Nazis in World War II. According to reports from TASS, Moscow does not see “any progress in talks with Ukraine”. NATO vehicles entering Ukraine to deliver weapons to the Kiev forces will be considered “legitimate military targets” by the Russians. Moscow Defense Minister Serghei Shoigu said this today after Russia said it had bombed six railway yards in Ukraine yesterday evening through which Western weapons were passing. “It is regrettable that a month and a half after the conversation with Patriarch Kirill, Pope Francis chose the wrong tone to convey the content of this conversation,” the Russian Patriarchate’s external relations department said in a statement, according to the Tax “Such statements are unlikely to contribute to the establishment of a constructive dialogue between the Roman Catholic and Russian Orthodox churches, which is particularly necessary at this time”. The talks of the leaders of the two churches took place on March 16 with a video link.

FINNISH AIRSPACE VIOLATED
A Russian military helicopter breached Finland’s airspace this morning, which is considering its entry into NATO. This was reported by the Helsinki Ministry of Defense. “The aircraft was a Mi-17 helicopter and the depth of the alleged violation was between four and five kilometers,” a spokesman for the ministry told AFP. This is the second violation reported by Finland this year, following last month’s incursion of a transport plane belonging to the armed forces of Moscow.

A Z in the sky of Moscow, the aerial tests of the Victory Parade

Moscow sees “no progress in talks with Ukraine”. NATO vehicles entering Ukraine to deliver weapons to the Kiev forces will be considered “legitimate military targets” by the Russians. Moscow Defense Minister Serghei Shoigu said this today after Russia said it had bombed six railway yards in Ukraine yesterday evening through which Western weapons were passing. “It is regrettable that a month and a half after the conversation with Patriarch Kirill, Pope Francis chose the wrong tone to convey the content of this conversation,” the Russian Patriarchate’s external relations department said in a statement, according to the Tax “Such statements are unlikely to contribute to the establishment of a constructive dialogue between the Roman Catholic and Russian Orthodox churches, which is particularly necessary at this time”. The talks of the leaders of the two churches took place on March 16 with a video link.

THE SITUATION ON THE FIELD
In the Kiev region, another 20 bodies were found in villages liberated from the occupation of the Russian army: thus the number of civilian bodies recovered rises to 1,235, which yesterday were 1,202. This was reported by the chief of police of the Kiev area, Andrey Nebitov, quoted by UNIAN. “Another 20 dead bodies were found yesterday alone. Most of the people were from Borodyanka and neighboring villages, and settlements in Vyshhorod,” he said, “most of them died from small arms fire. . We can talk about large-scale crimes committed by the Russian army in the Kiev region. “” We will continue to do everything to get our people out of Mariupol and Azovstal, both civilian and military. It’s difficult, but we need all of them. that they are there. There has not been a single day that we have not dealt with them, that we have not tried to resolve the matter. ” The Ukrainian president said so Volodymyr Zelnsky in a video message quoted by Interfax Ukraine. “We managed to resolve the ceasefire issue for nearly three days so that the humanitarian corridor worked. Now the Russian troops are not complying with the agreements. The massive attacks on Azovstal continue,” he added. Yesterday the Russian army launched 34 missile attacks against the cities of the Lugansk region, causing at least two deaths and two injuries among civilians. This was announced by the head of the Ukrainian regional military administration of Lugansk, Sergiy Gaidai, on Telegram quoted by Ukrinform. “The Russians are not only destroying Popasna, they are removing it from the map. Two people have died – a woman from Lysychansk and a man from Popasna,” he wrote. In Lysychansk, the Center for Dangerous Infectious Diseases and a school burned down. Sirotyn’s only school was destroyed. Russian forces carried out several raids on some villages in the Dnipro region of central-eastern Ukraine. The head of the regional military administration, Valentyn Reznichenko, reported on Telegram that dozens of residential buildings with multiple rocket launchers were targeted, but were not injured because “most” of the inhabitants had been evacuated earlier.