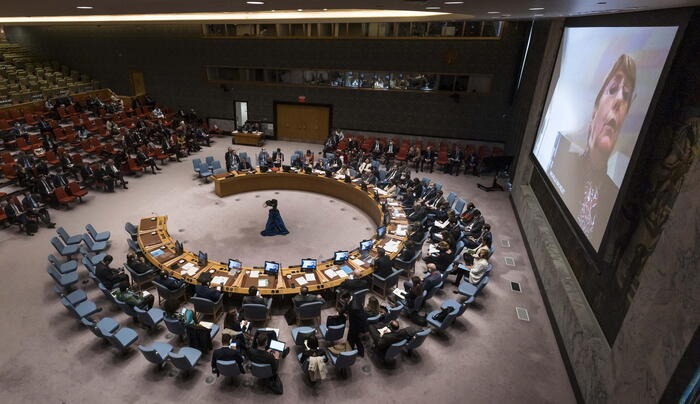 The situation of the Azovstal steel plant in Mariupol compared to hell by Ukrainian Prime Minister Zelensky and the UN secretary is increasingly criticized. “The worst is that we have still civilians in the air-raid shelters “, he said, specifying that” lately, after a heavy bombardment, 2 civilians have died and I think 10 injured. Fifty civilians have been evacuated today from the Azovstal steel plant in Mariupol. The authorities in Kiev said this, while the Russian media reported 51 evacuees in all, including some children. The humanitarian corridors will now remain closed until tomorrow morning, on the last day of the ceasefire announced by Moscow, stresses Tass.

A demonstration by the wives of the Ukrainian military under siege at the Azovstal steel plant in Mariupol demanding negotiations with the Russians to obtain the evacuation of their husbands was dispersed by police in Kiev, according to the Guardian. The officers also handed out postcards for military conscription to the men who were present at the rally. About fifty people had gathered, despite the prohibition of the authorities, in Independence Square, to ask that the negotiations for the evacuation not only concern civilians, but also men in arms, including members of the Azov Regiment.

The American president Joe Biden will sign on Monday 9 Maythe day in which the victory over the Nazis in World War II is celebrated in Russia, the law that will speed up the supply of arms to Ukraine. This was announced by the spokesman of the White House, Jen Psaki. The measure had been approved by the House and Senate at the end of April. The law, which is called the ‘Ukraine Democracy Defense Lend-Lease Act’, is inspired by the 1941 measure that allowed the US to arm the British army against Hitler and allows military equipment to be lent to any foreign government “whose defense is assessed. vital by the US president “.

Ukraine would be willing to accept a compromise peace deal with Russia if Moscow’s forces withdraw “on February 23 positions”. This was stated by President Volodymyr Zelensky, speaking on video at Chatham House, a British think tank based in London, and hinting that at least for now Kiev would not expect the return of Crimea, annexed by the Russians in 2014. “For our part, not all the diplomatic bridges have been burned “, he then specified, avoiding making requests even on that part of the Donbass between Donetsk and Lugansk which in turn has been removed from the control of Kiev since 2014.

The curfew was announced in the province of Odessa for May 9, the day in which the victory over the Nazis in World War II is celebrated, due to the “high risk” of the Russians bombing the city on that date. The Kyiv Independent reports. The curfew will remain in effect from 5 pm on Sunday 8 May to 5 am on Tuesday 10.

The Russians believe they can remain “unpunished” with respect to “their war crimes because they have the power of a nuclear state”, Ukrainian President Volodymyr Zelensky denounced today, not without defining the attack by Moscow forces on Mariupol’s Azovstal. as something that “is not a military action” but “torture” by attempting to “starve” the besieged. A strategy, he added, the fruit of the “bestial attitude” of the Russian military fueled by his saying of “hatred” and “anti-Ukrainian propaganda” for decades.

Russia will remain “forever” in the south of Ukraine, said an important member of the Moscow Parliament, Andrei Turchak.

Meanwhile Russian forces are bombing Odessa from the Crimean territory, launching missiles. This was reported by the UNIAN agency underlining that sirens sound in the city. “Explosions can be heard in Odessa. The air defense is working. Stay safe”, the appeal launched to the population.

‘THE HELL’
Russian forces continue to bomb the Azovstal steel plant even though “civilians have yet to be evacuated”: Ukrainian president Volodymyr Zelensky said this last night, comparing the situation in the large Mariupol steel plant to hell. The Kyiv Independent reports it. “The women and many children are still there – said Zelensky -. Imagine hell: more than two months of continuous bombing and constant death in the vicinity. It is not clear how many civilians are trapped in the plant”. The UN Secretary General, António Guterres, called the Mariupol war zone a “hell”. The UN and the International Committee of the Red Cross have so far helped nearly 500 civilians flee the Azovstal steel plant area in the port city in two operations last week. A third UN operation for the evacuation of civilians from Mariupol has begun in the last few hours.

Mariupol the hell on earth, in Kiev resumes life

TOWARDS MAY 9
At the moment the celebrations a Mariupol on May 9th for victory day they are impossible. This was stated by the spokesman of the Kremlin Dmitry Peskov, according to reports from the Tass agency. “I have no information on an official delegation,” Peskov said in response to a question about Moscow’s possible dispatch of an official delegation to Mariupol for Victory Day. The organization of the celebrations in the city, he said, “is impossible for obvious reasons”. Peskov, reports Interfax, said however that he is certain that the time will come for these celebrations. “Ukrainian citizens should pay particular attention to the alarms of 8 and 9 May: in these days, the Russian occupiers can organize massive bombings of various settlements to increase the terror of the civilian population”. The alert is from the Ukrainian National Security and Defense Council, according to UNIAN. “Russian troops cannot boast significant achievements at the front before Victory Day and the risk of massive bombing of cities is increasing. During these two days, law enforcement will work in intensified mode,” he adds.

THE RUSSIAN FRIGATE BURNS
A Russian frigate Petrel 11356R is burning near Snake Island in the Black Sea after being hit by a Ukrainian Neptune rocket. This was confirmed by people’s deputy Oleksiy Honcharenko on Telegram, quoted by the Ukrainian media. An explosion would have occurred on the ship, followed by a fire. Russian planes are flying over that area of ​​the Black Sea and rescue ships have arrived from Crimea to aid the frigate. According to updated data from the Ukrainian General Staff “the Russians have lost a ship”.
The Russian frigate struck in the Black Sea that is burning near Snake Island is said to be Admiral Makarov ‘, involved in an attack on the city of Odessa in April. A precious target for the Ukrainians – according to Forbes – as she is the latest and most modern ship in her class. All three Admiral Grigorovich-class frigates belong to the Black Sea Fleet, based in Sevastopol. They are armed with 24 medium-range Buk surface-to-air missiles and eight Kalibr cruise missiles. These frigates can escort other ships and also attack targets on the ground. After the sinking of the cruiser Moskva, the Russian Black Sea fleet had dropped to only three large combat ships, the best being the new missile frigate Admiral Makarov. The Kremlin has no information on Russian ships hit in the Black Sea. This was stated by spokesman Dmitry Peskov, stressing that the news of the missile that would hit the Admiral Makarov frigate comes from Ukrainian sources. Even the Pentagon has no elements that can confirm that the Russian frigate Makarov was hit by Ukraine. “We have been working on it all day but at the moment we have no information to corroborate this news,” said US Department of Defense spokesman John Kirby.

WITHOUT WATER ALREADY 1.6 MILLION UKRAINIANS
Ukraine would be willing to accept a compromise peace agreement with Russia if Moscow’s forces withdraw “to their February 23 positions”. This was stated by President Volodymyr Zelensky, speaking on video at Chatham House, a British think tank based in London, and hinting that at least for now Kiev would not expect the return of Crimea, annexed by the Russians in 2014. “For our part, not all the diplomatic bridges have been burned “, he then specified, avoiding making requests even on that part of the Donbass between Donetsk and Lugansk which in turn has been removed from the control of Kiev since 2014.

HIT AND ANSWER ON INTELLIGENCE
‘The US has provided intelligence information who helped the Ukrainians kill numerous Russian generals. ‘ The revelations of the New York Times. And CNN: ‘Also to hit Moskva’. The wrath of the White House over media scoops. “Moscow has repeatedly lied to this Council with a rampant series of conspiracy theories and disinformation, each falsehood more ridiculous than the other.” The American ambassador to theUn, Linda Thomas-Greenfield, during the Security Council meeting. “We have not provided any specific information to Ukraine to target the Russian cruiser Moskva.” Pentagon spokesman John Kirby said this, denying the news revealed to sources informed at CNN. “We were not involved in Kiev’s decision to strike the warship or in the operations that led to the attack,” he stressed, explaining that the United States had not been informed by Ukraine “of its intentions to strike the attack. cruiser “of Moscow.

Ukraine, the attack on the Azovstal steel plant in Mariupol

STALL OF NEGOTIATIONS
“The peace talks between Russia and Ukraine have stalled”. This was stated today by Alexey Zaitsev, deputy director of the information and press department of the Russian Foreign Ministry, according to the Russian agency Tass. “The statements of Ukrainian politicians are the clearest proof of their reluctance to continue” the talks, he added. “For example, on May 4 Zelensky said he did not see a prospect for the talks, while the head of the Ukrainian Security Council, Oleksiy Danilov” rejected any possibility of a peace agreement with Russia, “he continued.

‘KIDNAPPED’
The UN has identified 180 cases of arbitrary detentions and possible enforced disappearances of local officials, journalists, activists, former army members and other civilians by Russian troops in areas of Ukraine controlled by Moscow: the High said. United Nations Commissioner for Human Rights, Michelle Bachelet, reports the Guardian. Five of these people were found dead and some were taken to Belarus and Russia, unbeknownst to their families. Eight cases of possible enforced disappearances of pro-Russian individuals in Ukrainian-controlled territory were also found.