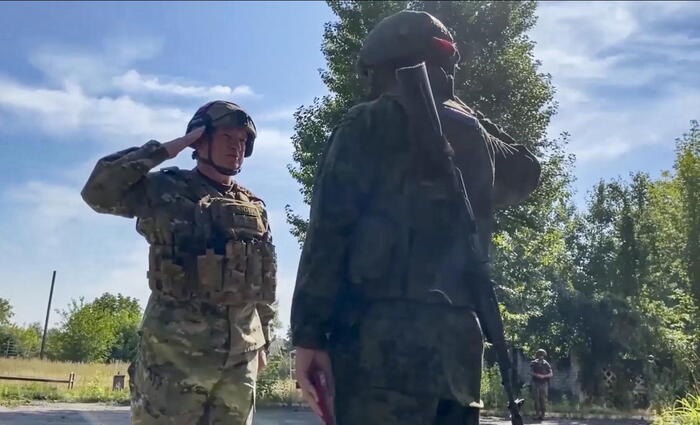 The head of the Russian group of Wagner mercenaries, Yevgeny Prigozhin, said today that hard and bloody fighting is underway on the outskirts of Soledar, a city in eastern Ukraine close to Bakhmut, the hottest spot on the front. “Let’s be honest. The Ukrainian army is fighting bravely for Bakhmut and Soledar. Very hard and bloody fighting is going on in the western suburbs of Soledar,” Prigozhin said, quoted on Telegram by his press service. “The Armed Forces of Ukraine are honorably defending the territory of Soledar. Claims of mass desertions from his ranks do not correspond to reality,” he added.

The town of Soledar, about 10 kilometers northeast of Bakhmut, is adjacent to Bakhmutské, a village that pro-Russian separatists said yesterday they had captured. Wagner’s troops are playing a leading role in the battle for Bakhmut, a city of dubious strategic importance, but which has taken on strong symbolic value as both sides have been fighting for its control for months. Yesterday Prigozhin said that the assault on Soledar was carried out “exclusively” by members of his organization. The British Ministry of Defence, part of the fighting aims to control the entrance to an old salt mine at Soledar, as its tunnels pass under the front line and could be used to ‘infiltrate behind enemy lines’.

Tass announces appointment, but Kremlin neither confirms nor denies (ANSA)

The British Ministry of Defence, in its daily intelligence update on the situation in Ukraine, claims that Russian and Wagner forces probably control most of the town of Soledar. In the report, posted on Twitter, London comments that the capture of the town is probably still Moscow’s main immediate operational objective. Russia’s Soledar axis, according to ministry experts, is an attempt to isolate Bakhmut from the north and disrupt Ukrainian lines of communication. Despite the increased pressure on Bakhmut, the report concludes, Russia is unlikely to encircle the city any time soon, as Ukrainian forces maintain stable defensive lines at depth and control of supply routes.

On the other hand, the military commissar of the Russian region of Samara, Alexey Vdovin, announced that the authorities will not publish a list of those killed or wounded in the New Year’s attack on Makiivka, where according to Moscow “at least 89 Russian soldiers” were killed and according to Kiev “about 400”. This was reported by the online newspaper Meduza, specifying that local activists have asked for the publication of the names of the soldiers killed and a petition with this request has so far collected 49,000 signatures. According to various media, many of the victims of the bombing were reservists mobilized for the war in Ukraine and originally from the Samara area. 63.ru – also quoted by Meduza – writes that Vdovin explained the refusal to disclose the names of the victims with the fact that such lists contain personal data and can lead to “provocations” by foreign intelligence agencies.