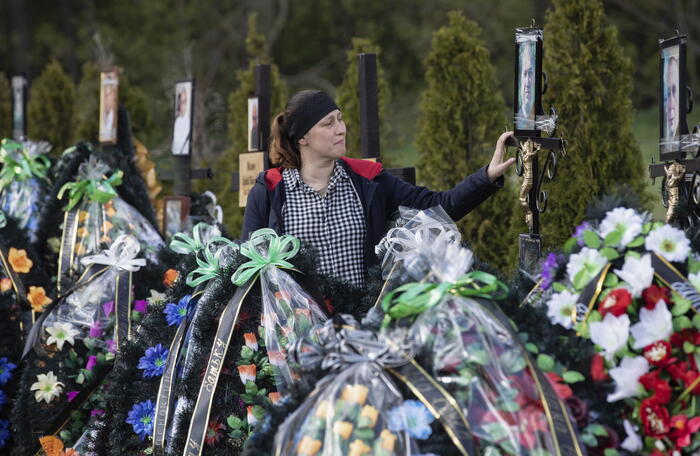 New Russian attack on the Azovstal plant in Mariupol where a fire broke out visible from all over the city. This was announced by the deputy commander of the Azov regiment, Svyatoslav Palamar ‘Kalyna’ on Telegram according to reports from Ukrainska Pravda. “The Ukrainian defenders of the Azov regiment are alive, but they are being bombed,” he said. A hundred civilians who left the city yesterday. According to Kiev, they still exist inside the Azovstal steel mill 200 civilians and 20 children.

“Dead and Injured” are reported to Odessa after a Russian missile bombing. This was reported by the head of the regional military administration, Maxim Marchenko, quoted by the UNIAN agency. The Russian missile attack on Odessa in the afternoon hit an Orthodox church. A 15-year-old boy was killed and another teenage girl was seriously injured. This was stated by the secretary of the National Security Council, Oleksiy Danilov, quoted by the Interfax Ukraine agency. The church’s roof collapsed, Danilov added. According to other sources, the church is located very close to a military structure.

“In the Kiev Oblast, particularly in the liberated territories, we have so far documented 1,202 lifeless bodies of innocent civilians killed by the Russians,” Kiev regional police chief Maksym Ocheretianyi said in a briefing.

All heads of state of the countries they supply arms to Ukraine must be brought to justice as war criminals: the president of the Duma, the lower house of the Russian parliament, Vyacheslav Volodin, wrote today on his Telegram channel. According to theBritish intelligence more than a quarter of Russian units dedicated to the invasion are probably now “unfit for combat”. Meanwhile, in the diplomatic field, the Turkey he said that Russia’s military action creates difficulties in carrying out the negotiations between Moscow and Kiev. “The war in Ukraine is not a proxy war. It is there propaganda of Russia who wants to spread this theory. The United States and NATO are not at war. “White House spokeswoman Jen Psaki said in a press briefing.

Ukraine, the evacuation of civilians from Azovstal

“L’Italy is in the front row among those who promote anti-Russian sanctions: for us it was a surprise, “he said last night Lavrov interviewed in ‘Zona Bianca’ on Rete 4. Moscow does not aim at “topple Zelensky“but that” there will be no more threats to Russia from Ukraine “, Lavrov said, again accusing Kiev of using” neo-Nazi “forces. Finally,” That President Volodymyr Zelensky is Jewish has no meaning. In my opinion too Hitler was of Jewish origin“, Lavrov stressed. The words of the Russian minister provoked the wrath of Israel who summoned the Russian ambassador to Tel Aviv.

Hear explosions in Odessa and Kherson. Eight civilians were killed yesterday in Russian bombings in the Kharkiv and Donetsk regions. During the night, the Russian city of Belgorod, not far from the border with Ukraine, was hit.

The de facto war also extended to Russian territory, near the border. In the past two days, the Belgorod region has been targeted again. Powerful explosions were warned by the inhabitants of the capital while a fire broke out in a Russian military structure: one wounded and several houses damaged. In Kursk, the authorities reported that part of a railway bridge collapsed due to “sabotage”. According to Moscow, dozens of sites have been hit so far by the Ukrainians on Russian soil. And the number of civilian victims continues to grow since the beginning of the conflict. There are over three thousand, according to new data provided by the UN, even if the verification difficulties lead us to assume that there are many more. While the Kiev prosecutor’s office – net of the news circulated in the media in recent weeks – announced that it had formally identified the first Russian suspect in the Bucha massacres: Sergey Kolotsey, commander of a unit of the Russian National Guard. He allegedly killed four unarmed men and tortured another civilian.

‘TWO MONTHS OF DARKNESS AND FEAR’
The evacuation of residents from Mariupol has begun. This was announced by the adviser of the mayor of the port city Petro Andryushchenko on Radio Svoboda, according to reports from Ukrainska Pravda. “According to our information, the buses have departed from Mariupol. By arrangement, the buses will collect people in the villages of Mangush and Berdyansk,” he explains. “You are also allowed to join the column by your own means. We hope that thousands of our Mariupol residents who have been stranded on the road from Mariupol to Zaporizhzhia will arrive at their destination tonight or tomorrow morning.”
“I can’t believe it. Two months of darkness.” Natalia Usmanova smiles and puts her hands on her face. She is among the approximately 100 civilians who were evacuated yesterday from the Azovstal steel plant in Mariupol and her testimony is told in a BBC video. “We haven’t seen the light of the sun anymore, we were afraid,” continues the woman, who spoke to reporters in the village of Benzimenne in eastern Ukraine under Russian control. “When we got on the bus (for evacuation) I said to my husband: will we no longer have to go to the bathroom with a flashlight?”, Says Natalia excited and incredulous: “And not having to use a bag or a bin as a bathroom and a torch “. “We went there (to Azovstal) for our free choice, like the workers of the factory, to save ourselves”, explains the woman, with her hair tied up, a yellow duvet and two large bags in her hands, while the images of the evacuation scroll by in the video. of the Russian Ministry of Defense. “When we realized they were getting closer and closer to us and we became more and more scared, we tried to leave. We knew about the humanitarian corridors and evacuations. But we didn’t succeed,” continues the woman. “And when the shelling started I thought my heart would stop and I wouldn’t survive. The shelling was so strong and it was starting to hit near us,” she recalls.

BERLIN, READY FOR THE RUSSIAN OIL EMBARGO
With a Russian oil embargo “we would have a local problem and obviously an increase in prices and perhaps the supply chains would not be safe but it would not affect the national economy as a whole. So, after two months of work, I can say that Germany it is not against an oil embargo on Russia. Obviously it is a heavy load to bear, but we are ready to do it. ” This was stated by the German Minister for Economic Affairs and Climate Action Robert Habeck arriving at the Council of Energy Ministers in Brussels.

‘ITALIAN POLITICIANS AND MEDIA GOING BEYOND’
“Some statements by Italian politicians and media went beyond good diplomatic and journalistic standards”. This was stated by Russian Foreign Minister Serghei Lavrov, interviewed in Zona Bianca on Rete 4. “Italy – added Lavrov – is in the front row among those who adopt and promote anti-Russian sanctions. For us it was a surprise. . We were used to the idea that Italy, thanks to its history, knew how to distinguish white from black “. Lavrov implicitly denied that Moscow plans to declare an end to the war in Ukraine on the occasion of the 9 May celebrations for the victory over the Nazis in World War II. “Our soldiers – he stressed – do not plan actions based on a date. The pace depends on the need to minimize the risks for the civilian population and for the Russian military”.
European countries that import Russian gas, such as Italy, have to pay for it in rubles because they “stole” Moscow’s dollar and euro currency reserves deposited with European banks by imposing a freeze under sanctions. This was stated by Russian Foreign Minister Serghei Lavrov, interviewed in Zona Bianca on Rete 4. “You will still pay in the currency provided for in the contracts – he added – but the supplies will be considered paid when these sums have been converted into rubles, which cannot be stolen. For the buyers nothing will change, they will pay the same sums foreseen by the contracts “.
“That President Volodymyr Zelensky is Jewish has no meaning. In my opinion, Hitler was also of Jewish origins.” Russian Foreign Minister Serghei Lavrov, interviewed in Zona Bianca on Rete 4, thus answered the question whether he does not consider it paradoxical to accuse the Ukrainian president of being the head of a country which, according to Moscow’s claims, must be “denazified”. Lavrov reiterated the accusations in Kiev of using “neo-Nazi” forces such as the Azov battalion. “People – he said – who have tattooed the swastika on their skin, which reads and approves the Mein Kampf”.

‘False and delusional’
“False, delusional and dangerous”. This is how Dani Dayan, president of Yad Vashem, the Museum of Memory in Jerusalem, defined the statements of the Russian Foreign Minister, Sergey Lavrov, who in an interview with ‘Zona Bianca’ on Mediaset said he believed that Hitler “had Jewish origins. “. These are statements – added Dayan, quoted by the media – “worthy of any condemnation”.
The Israeli Foreign Ministry has summoned the Russian ambassador to Tel Aviv for “clarification” after Minister Serghei Lavrov’s “serious” statements about Hitler and President Volodymir Zelensky. “Lavrov’s statements – accused Minister Yair Lapid – are both unforgivable and outrageous, and a terrible historical error”. “The Jews – he continued – did not kill themselves in the Shoah. The lowest level of racism against Jews is to accuse the Jews of anti-Semitism themselves.”