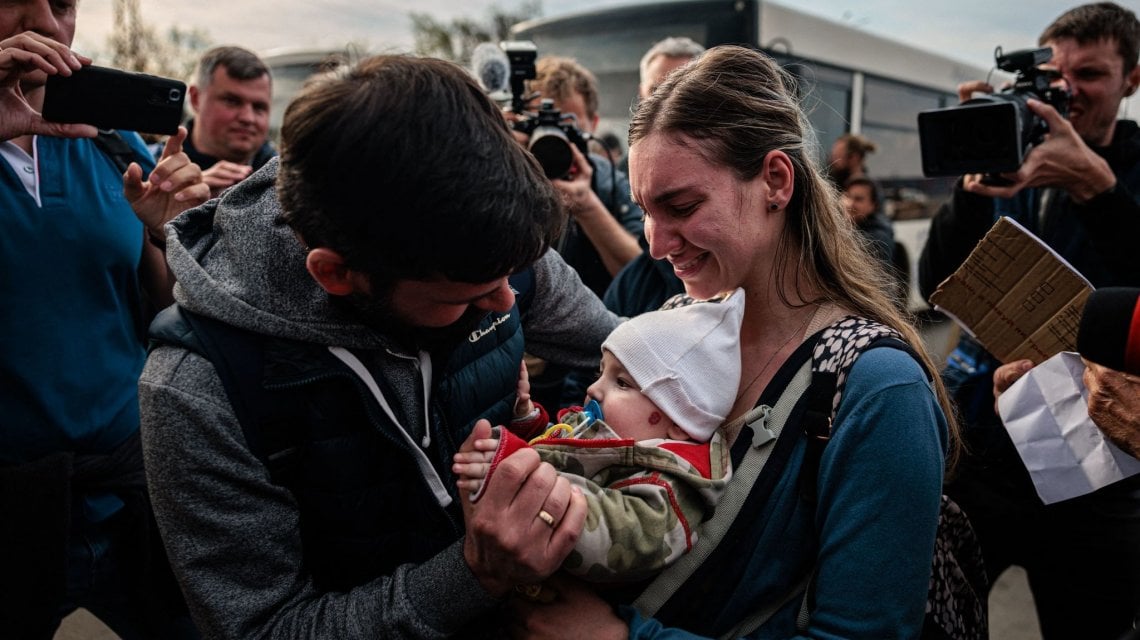 Today, on the 70th day of the war, Kiev hopes to open 4 humanitarian corridors. But yesterday evening closed with a shower of missiles on many cities and regions, from Lviv to Transcarpathia, on the border with Hungary, which had been hit for the first time. Six train stations in central and western Ukraine bombed in the evening. Meanwhile, Putin had a telephone conversation with Macron and asked to “stop the West from sending weapons to Kiev”. The French president has asked the Russian leader to end the invasion. Moscow is ‘still open to dialogue’ with Kiev, Putin said, according to the Kremlin. But he added that Ukraine ‘is not ready for serious negotiations’ to end the conflict. “If we do not oppose the dictators, they will continue to arrive,” said Joe Biden in Alabama while visiting the factory of the Javelin anti-tank missiles supplied to Kiev to defend against the invasion. Biden added that “Russian forces have committed many war crimes and the United States is leading support for Ukrainians to defend their country.” Zelensky said: “Ukraine’s goal is to restore its territorial integrity, including Crimea.” And on civilians in the Mariuopol steel plant: “We will save them all”

Ukraine has received 4.5 billion euros in financial aid from international partners since the start of the war. This was stated by the Ukrainian Prime Minister, Denys Shmyhal. Ukrinform reports it.

At least 27 people were killed in the collision between a bus, a fuel truck and a car in the western Ukrainian region of Rivne. This was announced by the Ukrainian Ministry of the Interior, quoted by the local media

Australia has imposed further sanctions on 76 other Russian politicians and 34 officials of the ‘puppet’ government installed in Ukraine’s breakaway Donetsk and Lugansk regions. Australian Foreign Minister Marise Payne said today. “These individuals have violated sovereignty and territorial integrity through their assertion of government authority over areas of Ukraine without the authorization of the Kiev government,” Payne said.

The US secretary of state, Antony Blinken, had an interview with the British foreign minister, Elisabeth Truss. State Department spokesman Ned Price announced this. Blinken confirmed support for Ukraine “where – he said – the courageous Ukrainian people continue to defend themselves against the brutal attacks of Putin’s war of aggression”. Blinken and Truss talked about further assistance to Kiev, both in terms of security and humanitarian aid, and discussed the “economic consequences for those who continue to offer financial or material support to the Kremlin’s war against Ukraine”.

A group of senior Russian intelligence officers is said to be working on the ousting of President Vladimir Putin and on a plan to end hostilities in Ukraine. This was reported by the London financial newspaper City AM “The idea that a coup may be imminent is further strengthened by the activity of social media in Russia and Eastern Europe, which has experienced an overload in the last 24 hours”, writes the City AM Furthermore, analysts inside and outside Russia have declared that there are all signs that Putin will soon face a coup. The Russian president is described as “very worried” and has strengthened security in and around the Kremlin, a very significant sign, according to Russian security expert Andrei Soldatov, interviewed by Cepa (Center for European Policy Analysis).

The Deputy Prime Minister of Ukraine, Iryna Vereshchuk, announced that four humanitarian corridors are planned for today for the Ukrainian city of Zaporizhzhia “if – he explained – the security situation allows it”. The corridors were planned by Mariupol, Lunacharske Circle, Tokmak and Vasylivka.

Russia has stolen 400,000 tons of wheat from the temporarily occupied territories of Ukraine, according to Ukrainian Deputy Agriculture Minister Taras Vysotsky quoted by the Kyiv Independent. According to Vysotsky, this is about one third of all grain stocks in the Zaporizhzhia, Kherson, Donetsk and Lugansk oblasts. And if this theft continues, says the deputy minister, these regions could face famine.

02.20 Borrell: We will do everything to prevent the war from spreading

The EU will do everything possible to prevent the war in Ukraine from spreading: this was stated by the head of European diplomacy, Josep Borrell, in an interview with AFP in the Panamanian capital, insisting on the need for greater sanctions against Russia. “We are helping Ukraine but without entering into belligerence – he added – This would mean extending the war and that is not what we want. And at the same time we are strengthening our sanctions”.

Ukraine, Pyotr Tolstoy: “The Russian army will stop only at the border with Poland”

by our correspondent Rosalba Castelletti

01.50 Telephone conversation between Putin and Lukashenko

Russian President Vladimir Putin and Belarusian President Alexander Lukashenko “discussed the situation by telephone in the context of the special military operation underway to protect Donbass”. This was reported by the Kremlin. Ria Novosti reports it.

00.57 Zelensky, 156 Mariupol evacuees are in Zaporizhzhia

Ukrainian President Volodymyr Zelensky said 156 people arrived in Zaporizhzhia yesterday after being evacuated from the Azovstal steel plant in Mariupol.
“Finally we have the first result of our evacuation operation in Mariupol, which we have been organizing for a long time – said Zelensky – in his last usual video-speech at the end of the day -. Finally these people are completely safe. The Russian troops are not staying. respecting the ceasefire agreements, continuing with massive attacks on Azovstal, but I believe there is a chance to save the rest of our people “from there.

It would be 18 cruise missiles launched by Russian forces against Ukraine in the attacks on various cities carried out on Tuesday evening. The Ukrainian armed forces report it. Ukrinform reports it. Of these eight would have been intercepted. The regions affected by the attack were those of Dnipropetrovsk, Kirovohrad, Lviv, Vinnytsia, Kiev and Zakarpattia.

00.43 Zelensky: we will be able to save everyone in the steel mill

Ukrainian President Volodymyr Zelensky says he is convinced that Ukrainian forces will be able to save all the besieged people in Mariupol including those inside the Azovstal steel plant. He said it in a video message, recalling that 156 evacuees from Mariupol arrived in Zaporizhzhia yesterday. “We will continue to make every effort to
bring out all the people from Mariupol and Azovstal. It’s difficult. But we need whoever is there: civilians and military. There is not a day that we do not face this problem, and that our people do not do something to solve it “

The stories of the survivors of the Mariupol night

00.05 Ukraine’s goal is to restore its territorial integrity, including Crimea

Ukraine’s goal is to restore its territorial integrity, including Crimea.
This was stated by Ukrainian President Volodymyr Zelensky virtually speaking at a meeting of the Wall Street Journal. “We hope that Crimea will be part of Ukraine,” says Zelensky

Six railway stations were hit this evening in Russian bombings in central and western Ukraine, according to reports from Ukrainian railways president Alexander Kamyshin, quoted by UNIAN news agency.
No deaths or injuries have been reported among railway staff or passengers, but the damage caused “is serious”, according to Kamyshin. Explosions were reported tonight in the regions of Lviv, Dnipro, Kiev and Kirovohrad. In one part of Lviv, power outages have been reported, which, according to Mayor Andriy Sadovyi, also affected some medical facilities.

The balance of the attack that took place in Lviv in the evening is of one person injured and three electrical systems damaged. The mayor of the city Andriy Sadovy says on twitter

Ukraine-Russia, news from the war. Today 4 humanitarian corridors. Missiles on several cities, hit Lviv. Putin to Macron: “Open to dialogue but Kiev is not serious”