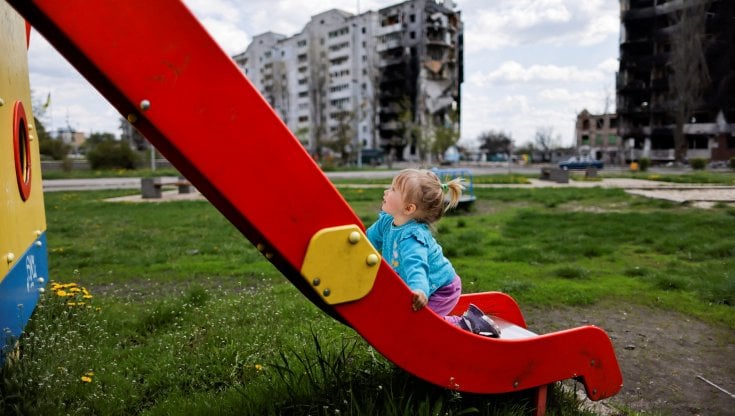 “The world must oppose this vile and dangerous rhetoric and support our Ukrainian partners in the face of the ferocious onslaught of the Kremlin.” US Secretary of State Antony Blinken wrote it on Twitter. Meanwhile, there was a new attack on the Azovstal plant in Mariupol, where a huge fire broke out. Victims are reported in Odessa: a church also hit, a 15 year old boy killed. Cluster bombs in Mykolaiv, as reported by the military commander of the city, Dmitry Pletenchuk. According to Ukrainian media, Russian missiles also hit a bridge over the estuary of the Dniester River in the Odessa region. The UN has estimated 3,000 civilian casualties while in Europe there is talk of an embargo on Russian oil. A new humanitarian corridor will be opened tomorrow morning to evacuate civilians from Mariupol.

The first 100 civilians evacuated from the Mariupol steel plant arrived late yesterday evening in the city of Zaporizhzhia, the international media reported, citing the Ukrainian military police.
“These are – explained in a statement – mainly women, children and the elderly, who will now have access to medical care, food, medicine and psychological assistance”.

“The world must oppose this vile and dangerous rhetoric and support our Ukrainian partners in the face of the ferocious onslaught of the Kremlin.” The US Secretary of State Antony Blinken wrote it on Twitter, repeating a tweet from the Israeli Foreign Minister Yair Lapid who condemned the anti-Semitic remarks of the Russian Serghei Lavrov.

00.50 Kiev: thanks to Germany for supporting Russian oil embargo

“I spoke to my German counterpart Annalena Baerbock and thanked her for her decision to support an oil embargo on Russia. Germany plays a crucial role in preparing this move.” Ukrainian Foreign Minister Dmytro Kuleba wrote on twitter.

00.36 Zelensky, we do not conduct military operations on Russian territory

00.03 Ukraine: new humanitarian corridor from Mariupol in the morning

At 7 am local a new humanitarian corridor will be opened to evacuate civilians from Mariupol.
The municipal council of the city reports it on Telegram.

Hungary would have been informed in advance by Russia of its willingness to invade Ukraine. The Kiev Independent says this, quoting the head of the Ukrainian Security Council, Oleksiy Danilov. The Ukrainian newspaper points out that on February 1st Viktor Orban went to Moscow to visit Vladimir Putin.

Russian forces carried out a new heavy bombardment on the Azovstal steel plant in Mariupol, where the last defenders of the city are barricaded, and the attack caused a vast fire. This was communicated to Ukrainska Pravda sources from the Azov regiment, whose men, it is reported, “continue to hold positions and respond to attacks”.

Ukraine is willing to accept the neutrality demanded by Moscow only if Russia leaves all occupied territories, including Crimea. This was stated by the Ukrainian president, Volodymyr Zelensky, in an interview with Al Arabiya. Zelensky said that “the Russians insist on neutrality and for us the most important thing is the liberation of Donbass and all temporarily occupied territories, as well as the Crimean peninsula, which is also occupied,” he said. The Ukrainian president then reiterated that, in order to accept the condition of neutrality required by Moscow, “security guarantees not to be the subject of similar attacks in the future, and other weapons in case we were to face a war like the current one” are needed.

Ukraine – Russia, news from the war today. Blinken: “Lavrov’s rhetoric is vile and dangerous”. Missiles over Odessa: a church hit. Kiev: “Hungary informed in advance of the invasion”