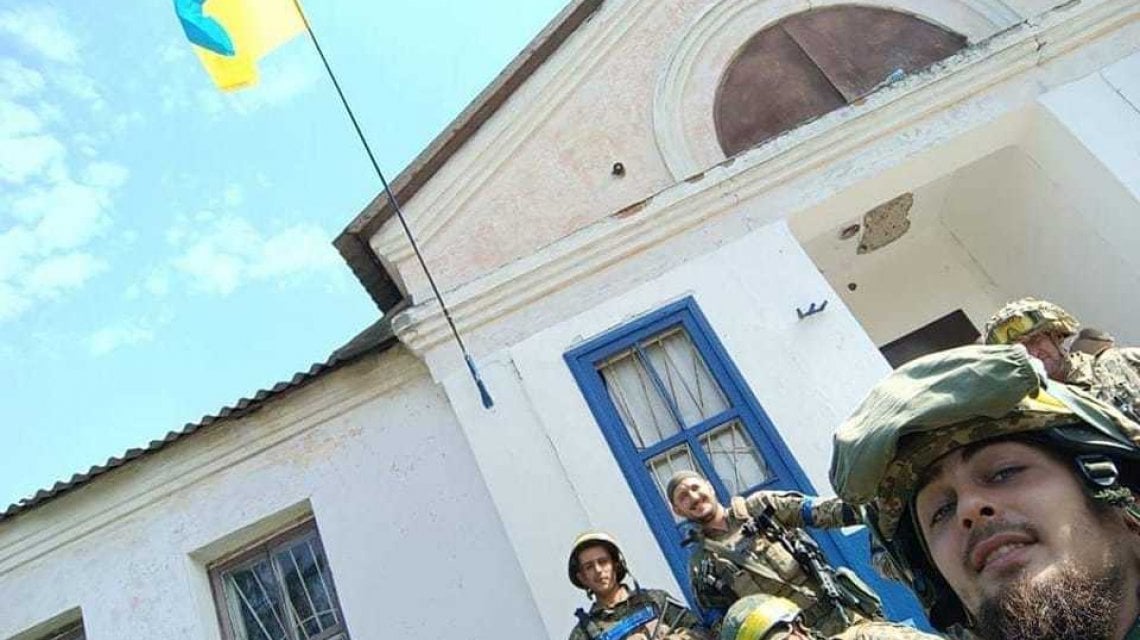 The Russian front in eastern Ukraine has succumbed and Ukrainian forces recaptured the cities of in just one day Kupyansk and of Izyum after a very rapid advance, which is not over and is spreading to other sectors of the front. Vladimir Putin he not only lost a strategic location in a few hours, nullifying months of bloody fighting, but for the first time ever his troops have gone completely into disarray. But the Ukrainian president is cautious. “Moscow hopes to break the Ukrainian resistance in the winter, counting on heating problems in Ukraine and a possible weakening of Western support for Kiev due to rising energy prices in Europe,” he said. Volodymyr Zelensky during the “Yalta European Strategy (YES) annual international forum held in Kiev.

Kreminna is the first reconquered city of Lugansk Oblast

Kreminna is the first city ofOblast of Lugansk regained by Ukrainian troops. This was claimed by the Ukrainian regional governor in exile, Sergiy Gaidai: the Ukrainian troops of
Kiev they raised the Ukrainian flag over the city and the pro-Russian forces would be on the run. “The successes in the counterattack are significant,” said the governor, “the complete de-employment of the region Luhansk it will begin after the final liberation of Izyum and Lyman. “Reconquered Kreminna, he explained, the next targets of the counter-offensive in Lugansk are the settlements of Svatov and Rubizhne.

Moscow, on visas to European citizens we do not respond with the same stupidity

Moscow considers it inappropriate to introduce visa restrictions for citizens of European Union countries as retaliation. This was stated by the Russian Foreign Minister, Serghei Lavrovon the sidelines ofEastern Economic Forum: “We consider it inappropriate to respond with the same stupidity,” said the head of Russian diplomacy, commenting on the EU’s decision to introduce visa restrictions for Russians.

The Chechen leader Ramzan Kadyrov criticized the Russian Defense Ministry for the withdrawal of troops from Ukrainian cities in the Kharkiv region, liberated by the forces of Kiev, threatening to go and speak personally with the Kremlin. “Mistakes have been made. And I think conclusions will be drawn. And if today or tomorrow there are no changes in the strategy of conducting the special military operation, I will have to go to the Ministry of Defense and the leadership of the country to explain to them. situation. It’s a hell of a situation, “he said in a audio message on Telegram

“Thousands” of people have fled the region of Kharkiv in Russia in 24 hours, a Moscow official said.

L’Aiea claims that the backup power line for the nuclear power plant of Zaporizhzhia it was refurbished, providing the plant with the external electricity needed for reactor cooling and other safety functions.

Zelensky: “Winter can be a turning point, but it will be hard”

“I believe this winter is a turning point and could lead to Ukraine’s rapid unemployment,” he said Zelensky in comments on a political forum posted on its website. “But we have to know, it will be a long and hard winter. Let’s see how (the occupiers) are fleeing in some directions. If we were a little stronger with weapons, we would be unemployed faster.”

Reconquest of Kharkiv, a Russian base destroyed by Ukrainian rockets: the inspection of the soldiers

Moscow claims to have launched an attack on Kharkiv, the media speak of retreat

The reaction of Fly to the Ukrainian counter-offensive. Russian forces are targeting the positions of the Ukrainian army in the region of Kharkiv with precision attacks, according to the Russian news agencies of the country’s defense ministry on Sunday. While the Ukrainian media speak of the withdrawal of troops from the very region in which Kiev is advancing and publishes videos of vehicles abandoned on the ground

Kharkiv, images of the vehicles abandoned by the Russians

Not only the reconquest of the eastern front and the advance south. According to the Ukrainian chief of staff the troops of Kiev they are also breaking through north, entering the area of Kharkiv. “There are 50 km to reach the state border (with Russia),” the general said on Telegram Valeriy Zaluzhnyi.

The Ukrainian chief of staff stated that Kiev has managed to regain 3,000 square kilometers of land since the beginning of September with the counter-offensive against the forces of Fly.

Ukrainian forces have continued to make significant progress in the past 24 hours in the Kharkiv region (East): British intelligence writes in its daily update on the situation in the country. At the same time, Russia has probably withdrawn some units from the area, continues the report published today by the London Ministry of Defense, but fighting continues around the strategic cities of Kupiansk and Izyum. The intelligence report then talks about grain exports from Ukraine, refuting the statement made by Russian President Vladimir Putin on 7 September last, that only 60,000 tons of wheat exported since August were sent to developing countries. According to UN data, London points out, about 30% of exports went to low-middle-income countries in Africa, the Middle East and Asia. Russia is following a disinformation strategy, the report concludes, to deflect blame on food insecurity issues, discredit Ukraine and minimize opposition to the invasion.

Russian forces attacked the cities of Dnipro, Nikopol and Mykolaiv in southern Ukraine last night, causing several injuries, local authorities said, according to reports Ukrinform. At least nine people were injured in heavy shelling on Mykolaiv, he wrote on Telegram Mayor Oleksandr Sienkevych, stressing that some residential buildings were damaged. For his part, the head of the Dnipropetrovsk Regional Military Administration, Valentyn Reznichenko, wrote on Telegram that a Russian missile hit the center of Dnipro, injuring a 72-year-old man. Also in the night, the city of Nikopol was hit three times and two men and a woman were injured.

“On 10 September the Russians killed 10 civilians in the Donetsk region: four – in Pokrovsk, three – in Krasnohorivka, two – in Bakhmut and one – in Raihorodok. Another 19 people were injured”. This was announced by Pavlo Kyrylenko, head of the Donetsk Region Military Administration, on Telegram. As Kyrylenko noted, it is currently impossible to establish the exact number of victims in Mariupol and Volnovakha.

The Zaporizhzhia nuclear power plant was completely shut down for safety reasons with the shutdown of the last remaining reactor in operation. This was announced by the Ukrainian operator for nuclear energy, Energoatom.

Chechen leader Kadyrov, we will take back cities lost by Russian troops

Chechen leader Ramzan Kadyrov promised to regain all the cities lost by Russia in Ukraine in the direction of Kharkiv. This was reported by the Ria Novosti agency. Yesterday, the Russian Defense Ministry reported that his troops in Balakleya and Izyum were grouped in the direction of Donetsk “to achieve the declared objectives of a special military operation to liberate Donbass”. Also yesterday, the pro-Russian head of the Kharkiv regional state administration, Vitaly Ganchev, announced that the evacuation of civilians from the cities of Izyum, Kupiansk and Balakleya, recaptured by the forces of Kiev, is proceeding. “I, Ramzan Kadyrov, officially declare that all these cities will be resumed, our people are already there, trained to do this work. We will reach Odessa in the near future,” Kadyrov says in an audio message on his Telegram channel, Ria Novosti continues. “I can’t blame anyone, because I don’t fully understand what strategy has been developed. But I know one thing: Russia will win”, concludes the head of Chechnya.

Zelensky, at the moment negotiations with Russia are impossible

Negotiations with Russia to end the war in Ukraine are currently not possible. This was stated by Ukrainian President Volodymyr Zelensky at the 17th annual meeting of Yes (Yalta European Strategy), according to reports from the Ukrainian agency Unia, citing the Office of the Head of State. “We want to end the war, but the space and the opportunities have changed,” Zelensky said, referring to the Russians as “terrorists”. “There is no reassurance that they will do what they say they will do. I think they will not.
Nobody believes him. As they say, they cannot be the ones to shake hands. “” The Russians are not ready to admit that they have occupied our country. This means that there will be no substantial dialogue “, added the Ukrainian president.” In order to open a diplomatic corridor, they must show political will, be ready to return foreign land. “According to the Ukrainian president, what will come will be” the most difficult winter in the whole world “and” a turning point in the liberation of the Ukrainian territories occupied by Russia “.

Moscow: “Our troops are just reorganizing”

“Russian troops are reorganizing near Balakliya and Izyum”, in the Kharkiv region, “to increase efforts in the direction of Donetsk, in order to achieve the objectives of the special military operation of liberating the Donbass”. This was stated by the Ministry of Defense of Moscow, quoted by Interfax, after the Ukrainian forces had claimed the reconquest of the two cities, as well as the strategic logistics center of Kupiansk.

Fighting continues on the outskirts of Lyman, a town in the Donetsk region, southeast of Izyum, which the Ukrainians are trying to regain. The mayor of the city, Oleksandr Zhuravlyov, told Suspilno. “The Russian army is still resisting,” Zhuralyov explained, “our flag hasn’t come yet. We have to wait a while.”

Ukraine – Russia, news from the war today. Electricity restored at the Zaporizhzhia power plant. Putin’s soldiers on the run, Kiev regains ground. But Zelensky warns: “Winter will be hard”