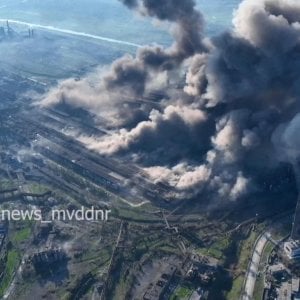 “Moscow lied to the UN Security Council several times”. These are the words of the American ambassador to the UN, Linda Thomas-Greenfield. “Russia – she said – has violated the United Nations Charter and ignored the global appeal to end the war”. And again: “We have images that confirm the presence of mass graves in Bucha”. Meanwhile Zelensky strongly reiterates that the Russian army continues to bomb the Azovstal steel plant even though “the civilians have yet to be evacuated”. “Women and many children are still there – said the Ukrainian president – Imagine hell: more than two months of continuous bombing and death”. A new evacuation of civilians from Mariupol is scheduled for the morning.

06.30 The soldiers inside the Ukrainian steel plant refuse to surrender

Ukrainian soldiers fighting Russian forces in the tunnels under the Mariupol steel plant refuse to surrender in the face of Russian attacks. The wife of the commander of the Azov regiment says they have sworn to “hold out to the end”. The Ap.

Azov, relatives of soldiers locked in the steel mill: “The government stops our mouths”

by our correspondent Paolo Brera

The UN has identified 180 cases of arbitrary detentions and possible enforced disappearances of local officials, journalists, activists, former army members and other civilians by Russian troops in areas of Ukraine controlled by Moscow: the High said. United Nations Commissioner for Human Rights, Michelle Bachelet. The Guardian reports it. Five of these people were found dead and some were taken to Belarus and Russia, unbeknownst to their families. Eight cases of possible enforced disappearances of pro-Russian individuals in Ukrainian-controlled territory were also found.

05.05 New UN convoy to Mariupol to evacuate civilians from Azovstal

A new UN convoy is expected this morning to evacuate the last entrenched civilians in the Azovstal steelworks in Mariupol, the last pocket of Ukrainian resistance in this strategic Donbass port. Even if no respite is guaranteed. Despite this uncertainty, the Undersecretary General for Humanitarian Affairs United Nations, Martin Griffiths, announced that this new convoy is heading for the city.

04.15 The Pentagon denies having helped Ukraine to eliminate Russian generals

The US Department of Defense denied providing information that would allow Ukrainian forces to eliminate senior Russian officers near the front, the New York Times reported. It is true that the United States is relaying information to Kiev “to help Ukrainians defend their country,” said Pentagon spokesman John Kirby. But, he added, “we do not provide information on the whereabouts of senior military commanders on the battlefield, nor do we participate in the decisions taken by the Ukrainian army.”

The UN Secretary General, António Guterres, called the Mariupol war zone a “hell”. The UN and the International Committee of the Red Cross have so far helped nearly 500 civilians flee the Azovstal steel plant area in the port city in two operations last week. A third UN operation for the evacuation of civilians from Mariupol has begun in the last few hours

02.48 Missiles on Kharkiv region, one dead

A person was killed today in Lozova, in the eastern Ukrainian region of Kharkiv, following a Russian missile attack: the mayor of the town, Serhii Zelenskyi, reported on Telegram, according to reports from Ukraine Pravda.

02.44 US Ambassador to UN, confirmation of mass graves in Bucha

“We have images that confirm the presence of mass graves in Bucha. And this is not just an unverified allegation on social media. It is a horrible fact that the world has to deal with.” The US ambassador to the UN, Linda Thomas-Greenfield wrote on Twitter.

02.25 US security guarantor Sweden and Finland until NATO accession

The United States is convinced that it can help Sweden and Finland on possible security problems in the time frame that will pass from applying to joining NATO. The White House makes it known. Sweden and Finland fear possible Russian threats after they apply to join the Atlantic Alliance as it could be up to a year before all 30 members give their approval.

Russian forces continue to bomb the Azovstal steel plant even though “civilians have yet to be evacuated”: Ukrainian president Volodymyr Zelensky said this last night, comparing the situation in the large Mariupol steel plant to hell. The Kyiv Independent reports it.
“The women and many children are still there – said Zelensky -. Imagine hell: more than two months of continuous bombing and constant death in the vicinity. It is not clear how many civilians are trapped in the plant”

01.26 Media, from US information in Kiev to hit Moskva

The United States provided intelligence that helped Ukraine strike the Russian cruiser Moskva, which sank on April 14 after being hit by two Ukrainian missiles. Informed sources report this to CNN.
After sighting a Russian warship in the Black Sea, Kiev called its American contacts to confirm it was the Moskva. The United States confirmed that she was the cruiser and provided information on her location. It is unclear whether the US knew Ukraine would attack and was not involved in the decision, the sources point out.

01.17 Zelensky, over 2,000 missiles on Ukraine since the beginning of the war

Since the beginning of the invasion, Russian troops have fired over 2,000 missiles on Ukraine and their fighters have carried out nearly 2,700 attacks in the country: Ukrainian President Volodymyr Zelensky announced yesterday evening speaking in video link at the charity event ‘Brave Ukraine ‘. The news agency Ukrinform reports. “In total, during this war, the Russian army launched 2,014 missiles on Ukraine and 2,682 Russian warplanes sorties were recorded in our skies,” Zelensky said. “Each of these attacks is the death of our people. the destruction of our infrastructure, “he commented.

00.45 Italy “in favor” of the Russia-Ukraine humanitarian group

Italy “appreciates and strongly supports the diplomatic initiative” of United Nations Secretary General Antonio Guterres “with his recent mission to Moscow and Kiev”. This was stated by the Ambassador of Italy to the UN Maurizio Massari during today’s meeting of the Security Council focused on Ukraine, the first for Guterres after his return to New York. Quoting the words of the Secretary General, Massari reiterated his belief that it is necessary to take “urgent steps” to achieve peace.
The first step, he added, is a broad and sustainable ceasefire. Italy “strongly supports” Guterres’ proposal for the creation of a “Humanitarian Contact Group” made up of Russia, Ukraine and UN representatives.

00.40 Ukraine: Jill Biden in Romania and Slovakia will see refugees

Jill Biden will leave in the next few hours for her mission in Romania and Slovakia where she will meet the Ukrainians forced to flee after the invasion of Ukraine by Russia. She reports it to her staff. The American First Lady will go to the Mihail Kogalniceanu NATO base in Romania to meet American troops. She will then move to Bucharest where she will see diplomatic staff and humanitarian workers for nearly three months helping thousands of Ukrainian refugees and she will have an interview with the Romanian First Lady, Carmen Iohannis. On Sunday, her mother’s day, the First Lady will travel to Kosice and Vysne, Slovakia, where she will meet other Ukrainian displaced families.

“There are no signs that Russia’s war against Ukraine is easing. Russia may have abandoned the plan to take Kiev but continues to terrorize Ukrainian citizens. Russia has violated the UN Charter, ignored the appeal global at the end of the war and lied to the UN Security Council multiple times through a series of conspiracy theories and disinformation with ridiculous falsehoods. ” This was stated by the American ambassador to the UN, Linda Thomas-Greenfield during a meeting of the Security Council.

Ambassador Maurizio Massari, permanent representative to the UN, at the meeting of the Security Council on Ukraine denounced once again how the indiscriminate bombing of Russia has targeted densely populated areas: “This is unacceptable and we strongly support the creation of safe passages for the evacuation of civilians “. “We are also concerned about the many journalists and media workers killed and injured since the beginning of the conflict and the cases of gender-based violence against women and girls,” he added.

“We are organizing a phone call between Biden and the leaders of the G7 for the next few days.”
White House spokeswoman Jen Psaki said this in a press briefing. “As for May 9,” the day on which Russia celebrates victory over the Nazis in World War II – and which, according to Western intelligence, could be the day Vladimir Putin intends to declare victory in Ukraine – ” we have no plans
specific “.

“It is important that many countries have taken tough decisions with Russia, Italy is one of them. We appreciated Rome’s leadership and the steps it has taken against Putin”. White House spokeswoman Jen Psaki said about Mario Draghi’s visit to Washington next week. “Biden and the Italian premier will certainly talk about it in their meeting,” added the spokesperson.