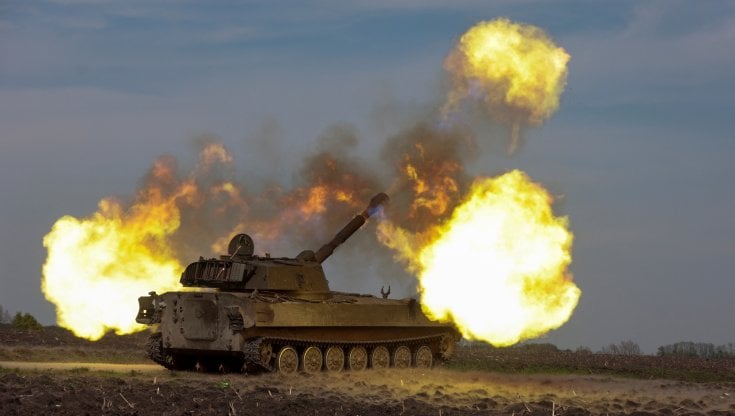 300 people have been saved from the Mariupol steel plant. Finally all the civilians have been evacuated. Prime Minister Volodymyr Zelensky said so. Now, he added, the second phase of the mission is kicking off to bring the wounded and doctors to safety. But also all the military. In a message to the nation, the Ukrainian leader thanked the Red Cross and the UN. And while the Russians prepare for the final assault, the Ukrainian marines, still barricaded inside the plant with the Azov regiment, launch a dramatic appeal: “Do not let us die”. Meanwhile, a Russian raid hit a school in the village of Belogorovka, in the Lugansk region. There are currently two victims, but the toll looks set to rise. From NATO a clear stance: “We will never accept the Russian annexation of Crimea”.

Chechen leader Ramzan Kadyrov claimed on Telegram that he had taken control of the city of Popasna, a city in eastern Ukraine in the Lugansk region with his troops, but Kiev denies it. “Heavy fighting for the city continues,” said Oleksiy Arestovych, advisor to the Ukrainian president, Volodymyr Zelensky.

04.15 Azovstal, “Many soldiers in serious condition, injured and without medicine”

With less and less ammunition and food and extreme living conditions, the last remaining Ukrainian soldiers entrenched in the Azovstal factory are still fighting. Details of life inside the plant were provided by Yevgenia Tytarenko, a military doctor, whose husband, a member of the Azov regiment, is still inside the steel mill. “Many soldiers are in serious condition. They are injured and have no medicine. Food and water are running out,” said the woman, who managed to maintain contact with the soldiers. “I will stay until the end”, wrote the man, also a military doctor, in a message read by France Presse.

03.50 Ukraine, Zelensky in videoconference at the G7

Ukrainian President Volodymyr Zelensky is expected to participate today in the videoconference meeting of the leaders of the major powers of the G7 to discuss the situation in his country, where the fate of the last besieged in the strategic port of Mariupol remains uncertain.

Mistakes on the ground and strict hierarchies: why so many Russian generals were killed in Ukraine

As in the years since the end of the Second World War, 77 planes and helicopters will fly in parade over Moscow on 9 May next, on the occasion of Victory Day, which commemorates the role of the Soviet Union in the war against Nazi Germany. .
This was announced by the Moscow Ministry of Defense, confirming that eight MiG-29SMT fighters will fly over Red Square forming the letter “Z”, in support of “Russian military personnel participating in a special military operation in Ukraine”, such as Russia defines the invasion unleashed on February 24th.

Putin ready at Red Square “The US at war against us”

by our correspondent Paolo Mastrolilli

More than 300 civilians have been rescued since the evacuation from the Azovstal steel plant began.
This was announced by the Ukrainian president, Volodymyr Zelensky, in a message to the nation quoted by CNN. “I am grateful to the teams of the International Committee of the Red Cross and the United Nations for helping us conclude the first phase of the evacuation mission – he said – More than 300 people were rescued, women and children”.

by our correspondent Paolo G. Brera

“Ukraine supplies 10% of the world exports of wheat, more than 15-20% of those of barley, more than 50% of those of sunflower oil. Fifty million tons of agricultural products are exported from Ukraine. It is physically impossible to replace its volumes “. Taras Vysotskyi, deputy minister of agricultural policies and food of Kiev, writes on Twitter.

Jens Stoltenberg: “The allies will never agree to give Crimea to the Russians”

There are at least two deaths after the Russian raid that hit a school in the village of Belogorovka, in the Lugansk region. The Ukrainian emergency services say so, adding that the two victims were found dead under the rubble. “On 7 May in the village of Belogorovka, in the Severodonetsk district, as a result of enemy bombing, a fire broke out in a school building with an area of ​​about 300 square meters. The fire was extinguished,” it was explained. We continue to dig.

Ukraine has asked Doctors Without Borders (MSF) to organize a mission to evacuate and treat entrenched soldiers in the Azovstal steelworks in Mariupol, in a press release released hours after the announcement of the evacuation of civilians. Ukrainian Deputy Prime Minister Iryna Vereshchuk wrote a letter to Michel-Olivier Lacharité, head of emergency programs at the humanitarian organization and MSF head of mission in Ukraine. The ministry, “referring to the principles that guide the work of the MSF organization, asks MSF to organize a mission to evacuate the defenders from Mariupol and Azovstal and provide assistance to the wounded, whose human rights have been violated by the Russian Federation”.