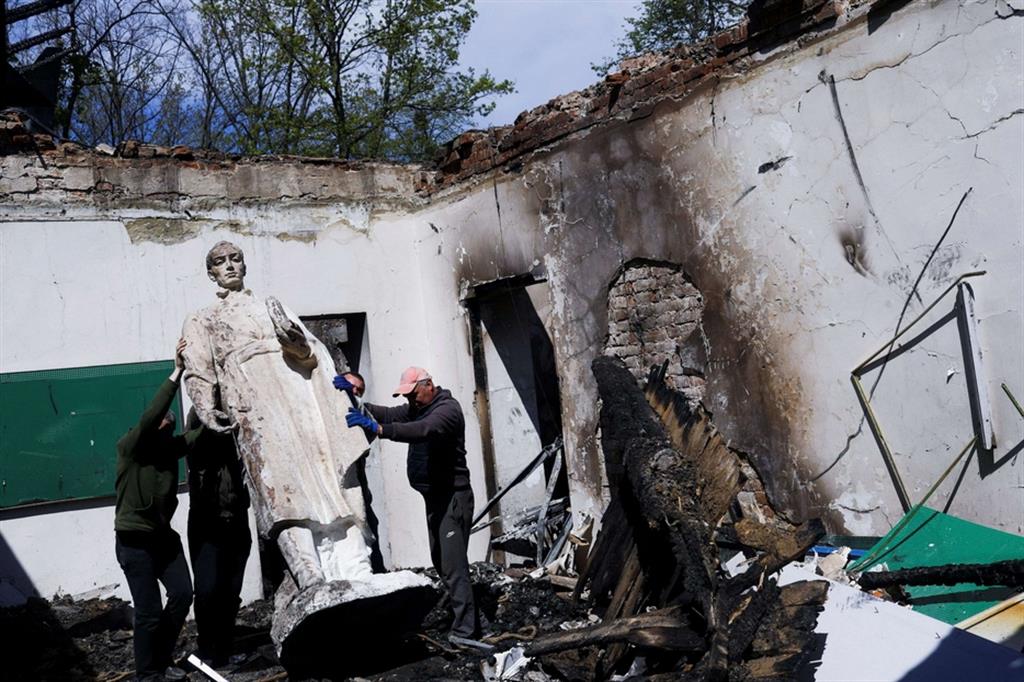 The statue of philosopher Hryhoriy Skovoroda amidst the rubble of the National Memorial Museum dedicated to him in Skovorodynivka, Kharkiv region – Reuters

The United States “participates in hostilities in Ukraine” wrote the president of the Duma (the Russian Parliament), Vyacheslav Volodin, on his Telegram channel. “It’s not just about the supply of weapons and equipment,” he added. “Washington coordinates and develops military operations” on behalf of the “Nazi regime in Kiev”, “thus participating directly in the hostilities against our country. “Volodin’s reference is to US intelligence information passed to the Ukrainians to hit Russian targets that the American media wrote in recent days.

For NATO deputy secretary general, Mircea Geoana, the war in Ukraine is entering a “decisive phase”, but NATO does not currently see an escalation between Moscow and the Atlantic Alliance“We think the next few weeks will be really decisive, even if the war could drag on for a longer period of time,” he said in an interview with al-Jazeera. “We do not see in military terms any indications that Russia is willing to escalate the situation with NATO – he continued -, nor that it has the capacity. So, the war will probably continue to rage, even more intensely, with further victims and sacrifices, but at the moment we do not see a risk of escalation “.

The Kremlin: from Poland “hostile rhetoric”

The Kremlin spokesman, Dmitry Peskov, accused the Polish authorities of “hostile rhetoric” and said that Poland could be a “source of threats” for Russia. On the other hand, Stanislaw Zaryn, spokesman for the Polish security services, accused Moscow of carrying out a coordinated disinformation campaign against Warsaw.

In recent weeks, some Russian media have accused Poland of wanting to occupy some territories of western Ukraine. “Russia’s goal is to create mistrust between Poland and Ukraine, as well as defame Poland and present it as a dangerous country that generates conflicts in Eastern Europe,” Zaryn told Reuters. Poland is one of the most resolute NATO members in demanding tougher sanctions against Moscow and more substantial and effective arms supplies for Kiev.

The UN: reopen the ports of Odessa to avoid global famine

The United Nations World Food Program (WFP) calls for the reopening of Ukraine’s ports to avert the looming threat of famine: “Ports in the Odessa area of ​​southern Ukraine must be reopened urgently to prevent the global hunger crisis from getting out of control “. “The grain silos of Ukraine are full. Ports on the Black Sea are blocked, leaving millions of tons of grain trapped in silos on land or on ships that cannot move. ”FAO estimates that they are 25 million tons of wheat blocked in Ukraine.

It was this morning 4 missiles hit the same area of ​​the Ukrainian aviation, adjacent to the Odessa international airport, where the damaged monastery is located a few days ago and in which a 15-year-old boy died.

Zelensky fears attacks on May 9: stay in cover

“I ask all our citizens, especially these days, not to ignore the anti-aircraft sirens. Please, it’s about your life, the life of your children. Also, strictly abide by public order and city curfew rules. and in the communities “. It is the appeal on Telegram by Ukrainian President Volodymyr Zelensky in view of May 9, Victory Day for Russia, which it is feared will be celebrated this year with actions in Ukraine.

Yesterday Zelensky had said Ukraine would be willing to accept a compromise peace deal with Russia if Moscow’s forces withdraw “on February 23 positions”, hinting that he would not demand the return of Crimea. “But Putin still wants war,” he added. And a member of the Duma (the Russian Parliament) visiting Kherson had said that Russia will remain “forever” in southern Ukraine.

There is fighting around Kharkiv. Skovoroda Literary Museum destroyed

It is fought in the east on the ground and from the sky. Missile attacks hit the Sumy region: This afternoon, planes arriving from the Russian Federation carried out two raids and dropped a bomb.

In the eastern region of Kharkiv, theRussian army bombed and blew up three road bridges. The General Staff of the Kiev Armed Forces explained that the missiles were fired on the settlements of Tsyrkuny and Ruski Tyshky “to slow down the counter-offensive actions of the units of the Ukrainian Defense Forces”.

Russian forces fired on a column of 15 fleeing civilian cars yesterday from a city occupied by Moscow in the Kharkiv region, killing at least 4 people: the UNIAN agency reports. The cars had left the city of Volchansk, in the Chuguevsky district, and were attacked near the city of Stary Saltov. Ukrainian police found six damaged cars and 4 burned bodies.

Meanwhile Ukrainian forces yesterday repelled 8 Russian attacks and shot down at least 14 drones of the Moscow army, reports the Ukrinform agency. According to the press office of the Joint Forces Operation, three Russian tanks were destroyed, as well as 8 artillery systems, 7 armored combat vehicles, 3 units of special equipment and one vehicle.

The National Literary Memorial Museum of Hryhoriy Skovoroda destroyed in the night by a Russian bombing in the town of Skovorodynivka, eastern Ukrainian region of Kharkiv. This was announced on Facebook by the head of the Zolochiv community, Viktor Kovalenko, taken up by the Ukrainian media. Except but injured the son of the director of the museum. Hryhoriy Skovoroda, an 18th century Ukrainian Cossack philosopher who lived and worked in the Russian Empire, worked and was buried in the estate.

Meanwhile in Mariupol another 50 women, children and the elderly were evacuated, in addition to yesterday’s 50, from the Azovstal steel mill where there is still fighting. The number of evacuated from the territory of the metallurgical plant reached 176 civilians.

Biden announces another 150 million in arms for Kiev

The additional package of military aid to Kiev announced by the president, Joe Biden, amounts to 150 million dollars. He made it known himself on Twitter. It is about radar, artillery ammunition and other equipment. Biden urged Congress and allies to continue ensuring the flow of arms to Kiev. With the announcement of the latest package, he explains, “my administration has the funds that can be used to send “military aid to Ukraine” are almost exhausted.

Meanwhile, the Wall Street Journal reveals that some Chinese tech firms are withdrawing from the Russian market without making announcements.