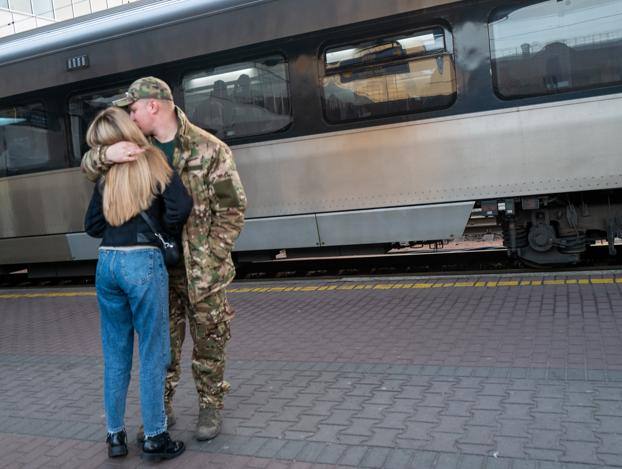 On the one hand marriages are on the rise, on the other those who decide to leave each other. “We have to hurry,” they all repeat. But it’s a race of risks

From our correspondent
KIEV – It’s not in the time of cholera. And it’s not in peacetime. Young Ukrainians, whether civilian or military, despite the bombs and despite the fact that it has been a year since war has turned their lives upside down, try to carry on their love life in some way, between bans, curfews and forced separations. There are those who – and there are really many given that in September there were 20 percent more weddings than the previous year – decide to get married.


Anastasia, 24, tells: «We had already loved each other for some time, but on February 27th we exchanged messages promising to protect each other». Anastasia, like many at that time, out of fear of war, had already left the country, finding refuge with relatives abroad. “I returned in July for the first time since the beginning of the occupation and we got married, a quick and simple ceremony». But living far away is not easy. Anastasia’s husband is a soldier at the front and she is abroad again. “I visit him every couple of months, he doesn’t want me to live in Ukraine. We hardly ever see each other, but we hope to have a child soon, we’re already joking about the name», says Anastasia. «Laughing on the phone one evening we thought of calling it Javelin (as the US anti-tank weapon has become one of the symbols of this conflict, ed)”. Children and dreams of love in times of war.

But there are also those who, after February 24, have decided to interrupt a stable relationship. For Ilya, 23, a university student from Kiev, it was an obvious choice. «My girlfriend went to Poland, I could not follow her due to martial law (men between 18 and 60 are not allowed to leave the country, ed), so I understood that each of us was in the place where the war had put him and I broke up with her».

Even for Svetlana, 26, also a student in the capital, the choice to break up with the partner with whom he had been living for three years was an obligatory step. She via WhatsApp, asking not to show her face, she says: «Being a feminist I cannot have a relationship with a partner who can theoretically be sent to the front and who I have to wait for. And so I focus on work and on myself, finding some peace. Now I’m thinking of going to study in the United States where my sister is already».

And if making plans for the future is complicated, while the Ukrainian economy is recording the worst numbers ever (in 2022 GDP fell by 30 percent), even making new meetings is not easy at all. «Here in Kiev, as in many other cities of the world, before the war things were very busy Tinder. But now it’s hard to rely on apps to find new partners. First because the curfew (which in the capital is in force from 11pm, ed) limits the chances of meeting. And secondly, because the world is burning out there, how can you think about having fun?» concludes Svetlana.

For Ilya, however, it is the opposite. “When the possibility of dying or being maimed becomes higher than usual, you are forced to value the time you have and so you try to enjoy every moment. In the relationship with others and beyond. That’s why I decided not to waste any more opportunities, whether it’s with a girl or whether it’s at work or in the studio. Everything must be lived immediately because tomorrow could be too late».

For Andriy, 32, a taxi driver from Mykolaiv, war is a passing phase. “I sent my wife and son to Poland, I also stayed because I don’t want to leave my country. They didn’t call me to fight, but in my free time I volunteer and working with journalists I put aside the money to send to my parents. So I seem to make sense of this horrendous period ». Certainly nostalgia and distance make everything more complicated. “At night, I wake up and look at their photographs. And sometimes I wonder if we’ll ever go back to living as before…”.

Sitting on a Kramatorsk bench, Private Pasha, 45, says he makes love to his wife as often as he can on every leave. “She may be the last. This gives me the strength to start again. Once the thought of Tatiana returned to the front (this is the name of her partner, ed) keeps me alive. I rub his photograph. And I feel that he protects me.”

According to Rodion Hryhoryan, a psychologist who assists the military at the front, “the war is forcing soldiers to repress their feelingswhether it’s anxiety or depression. And when they return home, they have enormous difficulty relating to their loved ones. They enter survival mode and laugh at the minimum emotions: but then stress and fear emerge with all the violence risking causing post traumatic stress syndromes ». In some cases, mechanisms of distrust towards the rest of the world are also created. «It is difficult for those who have seen their comrades die, to come back and pretend nothing happened. Some things you can’t tell or don’t want to tell to protect those around you. A mechanism that can trigger a great sense of anger towards the outside world. And often the first recipients of this discomfort are the companions and wives ». Since the war began, hardly anyone has reported cases of domestic violence or rape in Odessa. Sitting in a cafe, Zhanna Mishkevych, a city policewoman, explains: «I have a 16-year-old daughter who I forbade to go out alone. Because I know very well what goes on in men’s minds when they think the world might end tomorrow. I prefer it to be safe. You will have time for evenings to dance when the war is over.’

Ukraine, wedding and farewell: love under the bombs


Find here our social media accounts as well as other pages related to it.https://prress.com/related-pages/

Draghi to the OECD: 'Unlock ports, avoid food catastrophe' - Politics
Putin operated? That's who the general is who can take the lead
A Belarusian minister dies. In Kiev poisoning is evoked
Tweet
Share
Share
Pin