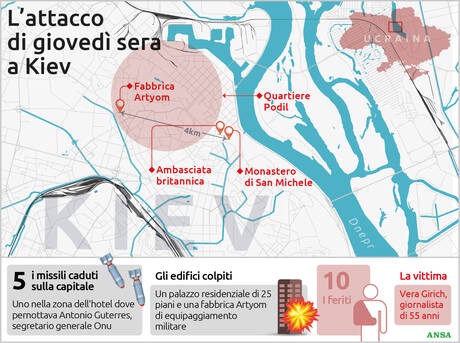 Volodymyr Zelensky is still ready to talk to Vladimir Putin despite the Russian atrocities in Bucha, Mariupol and other cities. The Ukrainian president said this to the Polish media, according to reports from the BBC. Zelensky said he wanted to meet with President Putin because “one man decides everything” in Russia. According to the Ukrainian leader, the risk of the negotiations with Moscow failing is high, because “after Bucha and Mariupol, people just want to kill them. And when there is such an attitude, it is difficult to talk about anything”. At the same time, he added, “if there is only one possibility, we should talk”.

Time has been lost in the bunkers and tunnels of the Azovstal. On the faces of the hundreds of civilians trapped under the steel mill the pallor of 65 days spent under siege and never seeing the light of the sun, and the anguish for what is turning into a slow and long agony. How long, very long is the wait for the last few hours in which signals have arrived from Kiev that give hope for a turning point, in the end of the nightmare. To feed this hope the staff of President Volodymyr Zelensky who, the day after the visit to the capital of the UN Secretary General Antonio Gueterres, spoke of an imminent operation to evacuate the elderly, women, children, families now exhausted, with the supplies of food and water almost running out. Even if with the passing of time everything is silent, with the fear that it was yet another announcement that has remained a dead letter, as with the many humanitarian corridors that in Mariupol have never been opened. Not even the leaders of the resistance barricaded in the basement of the plant say they know the details of the alleged evacuation plan, referring only to a mission that started from the capital and that would have arrived for now in nearby Zaporizhzhia. Although in the evening, according to what was reported by the Moscow state TV, Rossiya 24, the family of three of a plant operator would have managed to re-emerge from the plant and regain freedom. To extinguish the enthusiasm, however, also the news that the Russian soldiers would have again closed an area of ​​Mariupol north of the steel mill, a move that would suggest a new massive attack. At least this is the fear of Petro Andrushchenko, adviser to the mayor of the city martyr to this war, completely razed to the ground and that the High Commissioner for Foreign Affairs Josep Borrell has defined a new Aleppo, “the Aleppo of Europe”. “The risks of completely closing any dialogue with the Russians are very high”: Ukrainska Pravda reports – Ukrainian President Volodymyr Zelensky said during a conversation with the Polish media. According to Zelensky, the negotiation process with Moscow representatives is “very slow”.

FEAR IN KIEV
The West is concerned about yesterday’s Russian attack on Kiev: five missiles launched during the visit of the UN Secretary General Antonio Guterres and which damaged a 25-story residential building, injuring at least 10 people. Explosions hit the Podil neighborhood in the city center as a slap in the face of diplomatic efforts for peace two days before the face to face between the UN number one and Vladimir Putin in the Kremlin. Guterres said he was “shocked”, Zelensky spoke of an attempt to “humiliate the UN”, Di Maio on Twitter said that it was “a new escalation that creates great concern. This war must be stopped immediately. Full support for the Ukrainian people, stop condemnation of Putin’s war “. The military administration in Kiev has asked women with small children and the elderly not to return to the city. Ukrainska Pravda reports it citing an appeal on Telegram. “The threat to Kiev has not disappeared and yesterday’s missile attacks are proof of this. Given the recent events related to the fires in the oil depots, the detonation of ammunition depots in Russia, as well as the rhetoric of Putin’s propagandists, we can say that the threat has increased. We ask not to return to students, women with small children and the elderly! “, reads the appeal. “Vladimir Putin should not be invited to the G20”. The spokesman for the PentagonJohn Kirby, in an interview with CNN. “Putin has isolated Russia, he must pay for the consequences of what he has done and is doing” to Ukraine, he stressed. Today the Indonesian presidency announced that it had invited Russian and Ukrainian President Zelensky to the leaders’ summit to be held in November in Bali.

FIREWORK IN ODESSA
In Odessa a reinforced curfew is triggered on the occasion of the eighth anniversary of the massacre in the House of Trade Unions, where more than 40 people died. This was announced by the first Deputy Minister of the Interior, Yevhen Yenin, according to reports from the UNIAN agency, “to prevent provocations”. During the curfew, which will start at 10 pm on Sunday 1 May and will end at 5 am on Tuesday 3, it will be forbidden to drive on the street and in other public places without special permits and certificates. In the fire of the Odessa House of Trade Unions on May 2, 2014, many pro-Russian protesters died after violent armed clashes with supporters of the new Ukrainian course. Every year, on May 2, there were several initiatives in memory of the victims.

VOLUNTEERS CAUGHT
Two British volunteers providing humanitarian assistance in Ukraine have been captured by the Russian army. This was reported by the humanitarian organization Presidium Network, cited by the BBC. The two were arrested at a checkpoint near the southern Ukrainian city of Zaporizhzhia on Monday. It is believed that they were working independently but were in contact with the Presidium Network. The co-founder of the organization Dominic Byrne said that the two workers were trying to evacuate a Ukrainian family and that at one point the waiting civilians started receiving strange messages from the phone of one of the two British citizens. Two hours later, Russian soldiers stormed the family’s home questioning them about how they got in touch with the volunteers and claiming they were spies.A US citizen who fought as a contractor alongside Ukrainian military forces, Willy Joseph Cancel, was killed this week in Ukraine. CNN reports it citing the young man’s family. The 22-year-old worked for a private military company and was killed on Monday. The company had sent him to Ukraine and the young man was being paid to fight, explains Cancel’s mother, Rebecca Cabrera. When the war in Ukraine started, he accepted this new job: “He wanted to change because he believed in what Ukraine is fighting for and wanted to be a part of it, making sure that the war stays there and doesn’t spread.” “This morning the Russian army fired on the Sumy region in north-eastern Ukraine from the territory of the Russian Federation. Border guards recorded the arrival of more than thirty mortar bombs fired from the Russian village of Horodyshche.” . The border guards wrote this in a statement quoted by Ukrinform.

THE EVACUATION FROM MARIUPOL
“Over 600 injured are still in the Azovstal plant field hospital.” The mayor of Mariupol Vadym Boychenko announced this, according to the Kyiv Independent, accusing the Russians of continuing to use heavy weaponsthe. “Before the hospital was bombed – he added – the number of injured was 170, now there are over 600”. Kiev is preparing an operation to evacuate civilians from the Azovstal steel plant in Mariupol. Reuters writes on its website, citing the office of Ukrainian President Volodymyr Zelensky: “An operation to get civilians out of the factory is scheduled for today,” said the presidential office, without providing further details. Radio Svoboda journalist Vera Girich, 55, was killed in the attack that hit a residential building in Kiev. Her colleagues made it known. The news was confirmed to ANSA on the spot. Girich lived on the second floor of the building. She also worked for the TV channel ‘1 + 1’. “Mariupol is there Aleppo European. The city was razed to the ground, with thousands of civilians killed. We will do everything to end this war as soon as possible. And to this end we will continue to help Ukraine “. Josep Borrell, the EU’s high representative for foreign affairs wrote in a tweet.” The war in Ukraine is transforming global geopolitics, “he added. 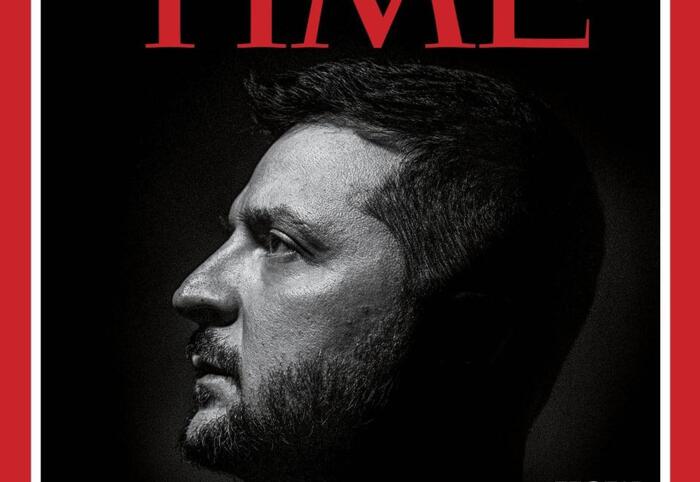 In the early hours of the Russian war in Ukraine, according to Time, the Russians were very close to capturing Volodymyr Zelensky and his family. (HANDLE)

AID TO UKRAINE
The US House, after the Senate, approved a measure that will allow Joe Biden to use a World War II law to deliver weapons to Ukraine more quickly. The measure invokes a 1941 law that allowed the US to arm the British army against Hitler and allows any foreign government to supply weapons if its defense “is deemed vital by the president for the defense of the United States.” Biden will also ask Ukraine for another 33 billion dollar loan. Zelensky thanked him, specifying that more than 20 billion of that amount could go to defense, 8 billion for economic support and 3 for humanitarian aid. “The approval by the American Congress of a bill that allows Russia’s assets to be used for helping Ukraine is an angry decision, a dangerous precedent for the expropriation of private property. ” This was stated by the spokesman of the Kremlin, Dmitry Peskov, quoted by Interfax.

THE GAS GAME
According to Brussels, Moscow’s request to pay for gas in rubles violates the sanctions but Orban’s Hungary has already said it is ready to pay in Russian currency in order to guarantee supplies. The pressure from NATO and the United States is growing for the entry of Finland and Sweden, while a massive Allied exercise in Eastern Europe is being prepared in which Great Britain – reports the Guardian citing the British Ministry of Defense – will participate with 8,000 soldiers , in one of the largest deployments of forces since the Cold War. Dozens of tanks will be deployed between now and the summer from Finland to North Macedonia, according to plans developed for some time but strengthened after the invasion of Ukraine by Russia. According to reports, the rounds of informal meetings between the EU Commission and the representatives of the 27 member countries on the sixth package of sanctions against Moscow began this afternoon. The outline of the new measures should include the enlargement of the list of personalities subject to the asset freeze, the blacklisting of additional Russian financial institutions and measures leading to the gradual oil embargo. The Commission will see, in separate meetings for groups, the representatives of the member countries throughout the weekend.