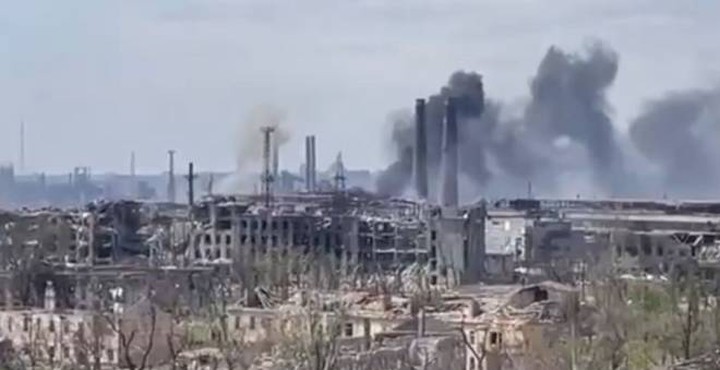 Kiev, May 3, 2022 – On the 69th day of the war the Russian forces have launched the ground assault on the Azovstal steel mill of Mariupol, defended by the Azov regiment, while they are arrived in Zaporizhzhia buses with over 100 survivors from the martyr city. In the evening, missile attacks are recorded throughout the country, including the West. Explosions to Lviv, Kiev, as well as Dnipro and Vinnytsia. Today’s news that the same Pope francesco he says he intends to go to Moscow to speak with Putin. In an interview with Corriere della Sera, the pontiff explains, however, that “we have not yet received an answer and we are still insisting, even if I fear that Putin cannot and does not want to have this meeting at this time”. “I’m not going to Kiev for now – adds Bergoglio -, I feel I don’t have to go. First I have to go to Moscow, first I have to meet Putin. But I’m a priest too, what can I do? I’ll do what I can. If Putin opens the door. the door…”. Diplomacy plays the card today Emmanuel Macronthe French president had a telephone conversation with over two hours with Vladimir Putin, the first of the two after the Bucha massacres and Macron’s re-election to the Elysée. The Russian president told his French counterpart that he was open to dialogue, but Ukraine “is not ready for serious negotiations”. The Kremlin number one then accused the EU countries of ignoring the war crimes of the Ukrainian forces in the Donbass, and asked the West to “stop supplying Ukraine with weapons”.

Draghi in the European Parliament: Ukraine immediately in the EU

The bridge in the Crimea, because Kiev must destroy it

Assault on the Mariupol steel plant

The final assault of the Russian forces on the steel mill Mariupol’s Azovstal has begun. As soon as numerous civilians were evacuated the attack has begunthe correspondent of the UNIAN agency writes on Telegram, the deputy commander of the Azov Battalion, Svyatoslav Palamar, “the occupiers started storming the Azovstal and now they are trying to enter the plant “which speaks of 2 women killed – whose photos were released – and 10 other civilians injured. The area had previously been hammered by heavy shelling: ” Prior to the assault, orc planes bombed Azovstal for several hours straight. There was a large-scale fire, a column of smoke is visible in all areas of Mariupol ”. So the truce was violated, with the usual exchange of accusations.

The Kremlin has announced that Russian forces and the separatist republic of Donetsk (DPR) have begun targeting the Azov Battalion’s attack positions on the steel plant. after men of the same battalion and the Ukrainian army had violated the ceasefire regime: “They came out of the basements, occupied attack positions on the territory and in the buildings of the plant. Now units of the Russian army and the DPR, using artillery and planes have begun to destroy these positions “, reports the agency Ria Novosti.

The mayor of Mariupol: Putin has overtaken Hitler, 40 thousand deported to forced labor

Missiles all over Ukraine

Air-raid alarms sounded in the evening in almost all of Ukraine. Besides Lviv And Kievexplosions would also have been heard a Dnipro And Vinnytsia. The Ukrainian anti-aircraft shot down a Russian missile near Kiev. The anti-aircraft sirens had already taken in the afternoon always in Dnipro e Zhaporizhia, in the East in the country, where – according to what the army of Kiev has made known – Moscow regrouping its troops and strengthening the artillery and air defense units. The regional governor, Oleksandr Starukh, has invited the inhabitants of the towns of Vasylivka and Tokmok to use the open ‘green corridor’ for the evacuation of civilians. Meanwhile, three other civilians were killed in a bombing raid in Vuhledar, in the eastern Donetsk region.

Ukrainian forces let it be known about having I saw 122 Russian soldiers in the last 24 hours and to have thwarted an attempt by the Moscow forces to seize an observation post of the Kiev army, writes on Facebook the Southern Ukrainian Task Force, cited by theUkrainska Pravda. The observation post, explains the Task Force, is located in the Kherson region (south) and was stormed by “an enemy sabotage and reconnaissance group”, which was “obstructed and crushed by mortar fire”.

Ukrainian war, assault from the ground on the Azovstal steel mill. Missiles also in Kiev and Lviv – National newspaper


You can view our social media profiles here , as well as other pages related to them here.https://prress.com/related-pages/