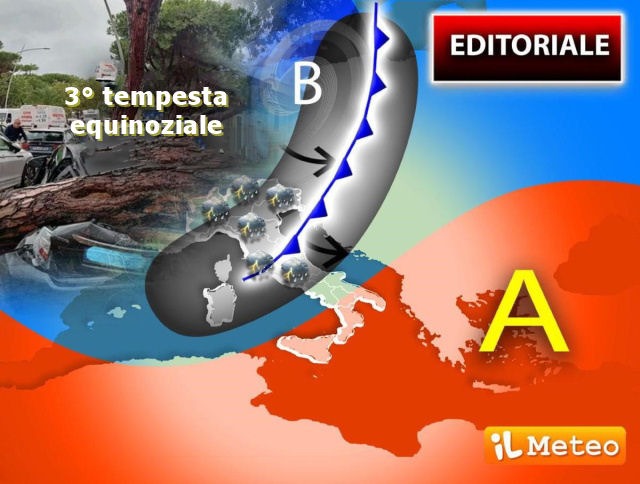 A very strong disturbance is comingLast days of the month with autumn temperatures, strong winds and bad weather again on the way.
We interviewed on these issues Lorenzo Tedicimeteorologist of the site www.iLMeteo.it.

So what’s going on in this strange September?
Everything comes from different solar heating during the mid-seasons, with the consequent formation of polar and subtropical air masses with extremely distant connotations: just think that in Norway at the moment the maximum temperatures are around 7/8 ° C, while in the North of Africa the sunny afternoons still record 35/40 ° C in the shade.
The difference between cold Norway and sub-Sahara heat thus becomes responsible for meridian exchanges of air masses in the gradual attempt to compensate for the thermal imbalance: this year Italy is in the midst of these phases of bad weather, defined as storms equinoctial.

So this year we are experiencing a period full of equinoctial storms?
Yes, in the last 10 days there have been 2 equinoctial storms, the first between 15 and 17 September, also associated with a very intense polar irruption, the second between last Saturday 24 and Monday 26, with subtropical warm air arriving. from the Maghreb. In both cases the bad weather reminded us that, in the days around theequinoxvery often exchanges of very different air masses take place.

He said bad weather is coming again, is it not by chance that he foresees another equinoctial storm?
Unfortunately, between Thursday and Friday there will be the third equinoctial storm with the arrival of polar air, heading south. This cold mass, currently on the North Sea between England and Denmark, will quickly sink towards the Mediterranean reaching even Algeria and Morocco. In our country we will experience a phase of widespread bad weather, with more intense phenomena towards the Center-North.

Pending this new disturbance, what will happen in the next few hours?
We will have a wait ‘sucker‘: twenty theses of’ Libeccio Freddo ‘are expected, with gusts of storm between Sardinia, Sicily and the Tyrrhenian side. The Libeccio Freddo is the wind that blows from the South-West and has colder connotations associated with the arrival of perturbations from Northern Europe. Here this cold libeccio will cause violent storm surges on the exposed coasts: waves up to 6 meters are expected on the Ligurian Sea! Even the Central Tyrrhenian Sea, towards Lazio, will present an intense storm with waves up to 4 meters, as will happen on the coasts of the Strait of Bonifacio.

When will we get out of this unstable and stormy phase?
With the’beginning of October could change everything again with the comeback of the Azores Anti-cyclone, even if at the moment we see a possible threat coming from the East: next week cold air from the Balkans could spoil, on part of Italy, the attempt of a sunny Octobrata and mild; in short, it will be a tug of war between the Azores and the Balkans.